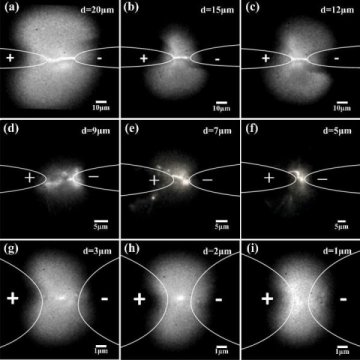 Innovations in microscale electronics, medicine, combustion and scores of other technologies depend on understanding and predicting the behavior of electricity on the smallest of length scales. Scientists already have a good grasp of a phenomenon known as “electrical breakdown,” when electricity jumps across large gaps and creates plasma. However, researchers have had little insight into the behavior of electricity as it jumps across very small gaps — only a few thousandths of a millimeter — until now.

A team of researchers from the United States and China reports new research that shines light on the behavior of electrical breakdown for the smallest gap distances ever studied: a mere 5 to 10 microns. (A micron is 1/1,000 of a millimeter or about 1/400,000 of an inch.)

“Our study shows the transition between gas breakdown mechanisms, or the process by which the gas becomes conductive, and the discharge path length — essentially how the electrons flow during their collisions with gas molecules, at very small scales,” said Allen Garner at Purdue University in West Lafayette, Indiana, and co-author of the paper published in the Physics of Plasmas, from AIP Publishing.

The researchers found that at these microscopic gap distances, no obvious discharge channel formed, meaning the breakdown did not originate from the avalanche mechanism found in larger gaps. Breakdown in small gaps also involves direct ion field emission from the positively charged gap surface. They also noted that the voltage necessary for electrical breakdown decreased linearly with decreasing gap distance at these smaller scales.

To conduct their research, the team used an electrical-optical measurement system, which integrated a high-magnification optical microscope with a high-speed ICCD camera, to measure the breakdown voltages and determine breakdown morphology (discharge shape and path length) as a function of gap width.

“Understanding the fundamental mechanism of gas breakdown at microscale will have far-reaching impact on practical devices due to the numerous applications that leverage microplasmas, including excimer laps, arrays for flat-panel light sources, medicine, environmental remediation, and combustion,” said Guodong Meng, from Xi’an Jiaotong University in China and lead author on the study.

“The importance of understanding breakdown at these smaller gaps relates these efforts to ongoing research on electron emission in vacuum electronics and motivates future work, unifying the various theories of electron emission and gas breakdown,” Garner said.