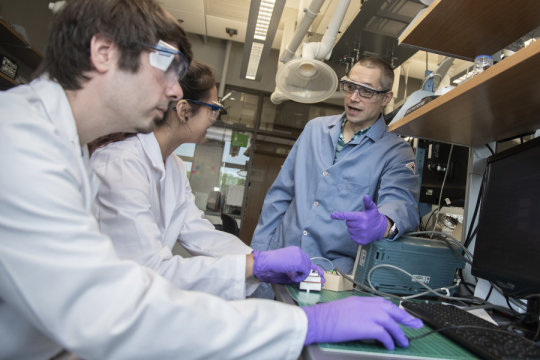 In 2008, a contaminant eluded the quality safeguards in the pharmaceutical industry and infiltrated a large portion of the supply of the popular blood thinner heparin, sickening hundreds and killing about 100 in the U.S.

It took a team of researchers led by the U.S. Food and Drug Administration to confirm the contaminant, a toxin structurally similar to heparin that was traced to a Chinese supplier. But detection of the impurity required “a tremendous effort by heavy hitters in the chemistry world,” said Jason Dwyer, associate professor of chemistry at the University of Rhode Island.

After nearly eight years of research, Dwyer has developed a simpler and quicker method for detecting the impurity in heparin, along with creating a process that could have wider benefits. His research was unveiled today in the online journal Nature Communications, part of the suite of journals from the publisher of Nature.

“There are tests that are much more sophisticated and expensive to detect the impurity,” said Dwyer, of Providence, R.I. “What we were able to do is — in a very inexpensive and rapid fashion — fingerprint heparin and tell when there is a contaminant in it.”

The research, “Surveying Silicon Nitride Nanopores for Glycomics and Heparin Quality Assurance,” could also be used to analyze the entire class of molecules to which heparin belongs with broad use in biomedical diagnostics, pharmaceuticals and environmental sensing. Dwyer’s wider studies of sugars were bolstered in July by a $318,000 grant from the National Science Foundation.

For example, Dwyer said, the new detection technique could serve as a quality assurance tool across the pharmaceutical industry, especially with an increased push to develop more sugar-based drugs, such as heparin. “Sugars are incredibly important,” said Dwyer, whose research in the past has garnered publication in the high-profile journals Nature and Science. “They’re how bacteria communicate with each other. They’re how we’re going to be designing a lot of new drugs. So we need new tools to analyze sugars.”

To develop the new detection technique, Dwyer turned to a sensing method proven in the sequencing of DNA and proteins. The sensor consists of a hole, or nanopore, less than a thousandth the thickness of a human hair, sitting on a membrane that is even thinner, and tests substances at the smallest detectable level — a single molecule.

While the sensor, a solid-state silicon nitride nanopore, worked well for DNA, it had to be retooled for sugar molecules, which are far more complex, said Dwyer, whose group was one of the first to focus on sugars.

Starting in 2010, the project developed along with other work by Dwyer’s team. It took years to fabricate and fine-tune devices, refine the nanopore and prevent the opening from clogging. “A fair number of students have worked on this project over the years,” Dwyer said. “We have not relented. We butted our heads against the wall for a period of time and we realized we needed to do a fair amount of fundamental work before we could get to the point of detecting.”

One unexpected problem was solved by Buddini Karawdeniya, lead author of the paper who completed her doctorate in chemistry at URI in the spring. When she attempted to run sugar molecules through the nanopore, they went backwards. “In 1996, people figured out how DNA could be sensed with a nanopore,” Dwyer said. “There were some oddities but it worked the way it was expected. Sugars right off the bat did not act as expected. So Buddini had to look at what had been done for 20 years, but know she had to start over at some level.”

With the 2008 crisis, researchers had managed to identify and detect the oversulfated chondroitin sulfate contaminant, which was nearly identical to the heparin. Using the fine-tuned nanopore, Dwyer’s research looked at both samples, determined that the signals they generated were 99-percent identical, and devised analysis techniques to use the 1-percent difference to reliably detect the impurity.

“The test we came up with takes about 20 minutes,” he said, “and works at clinically relevant concentrations.”

The goal is to make detection of the impurity even quicker, down to minutes and seconds. At the same time, the device will have to be adapted for a commercial user who may lack the expertise of a researcher in a technology development lab. Also, the tool would have to perform accurately in a less-controlled environment.

“This is where research starts to transition into development, and we start to refine the conditions and the devices even more,” Dwyer said. “Often discovery is the easiest part. Refining it for the end user takes time.”

The nanopore that came out of the heparin research was designed with that in mind. It uses technology similar to that found in nearly every piece of consumer electronics, said Dwyer, so there is already an industry ready to produce the sensors on a large scale.

“We always try to think about the consumer market,” he said. “What we do in the lab is one thing — and it is a vital thing — but how do we translate it into the real world?”

This material is based upon work supported by the National Science Foundation under Grant No. CBET-1150085.