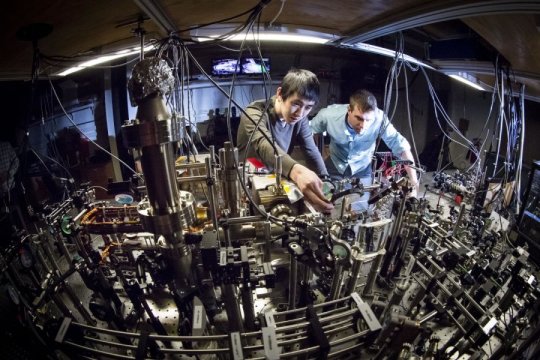 A recent flood of research scholarship on electronic transport in low-dimensional (2D or 1D) materials like graphene or carbon nanotubes reflects the tremendous potential of these materials to unveil a deeper understanding of the laws that govern the sometimes surprising emergent behavior of electrons. Scientists have probed novel materials like these to uncover the physics of topological superconductivity and topological insulators.

But one of the biggest challenges researchers face in studying real materials is the presence of uncontrolled impurities that influence electronic transport.

One way to get around this dirty issue of disorder is to study the same types of physical phenomena in artificial materials that have no natural imperfections. In recent decades, researchers have used neutral atoms moving in pristine crystals formed by laser light to perform quantum simulations to observe physical effects that would be hard to see in real electronic materials.

Now scientists at the University of Illinois at Urbana-Champaign using an innovative quantum simulation technique have made one of the first observations of a mobility edge in a low-dimensional system. Physics professor Bryce Gadway and graduate student Fangzhao Alex An were able to combine a disordered virtual material — in this case a pair of coupled 1D chains — with artificial magnetic fields to explore this phenomenon.

So what exactly is a mobility edge? It’s an energy-dependent insulator-to-conductor transition that occurs in disordered systems — a regime of metallic transport that arises out of a special kind of insulator, called an Anderson insulator. Only two groups have ever observed a mobility edge in 3D, and the first was U of I physics professor Brian DeMarco’s research group in 2011. Importantly, the phenomenon is induced by disorder, and according to the laws of localization physics, a mobility edge, let alone any kind of metallic behavior, should not occur in 2D or 1D materials.

Gadway comments, “This observation is truly noteworthy — this kind of behavior shouldn’t occur in lower dimensional systems with random disorder. There’s a subtlety to realizing it in one or two dimensions that relies on a sort of pseudo-random disorder. There are correlations in the disorder we engineered. It turns out this can allow for a metal-insulator transition.”

Gadway continues, “The type of correlated disorder that we used has some very funny properties. In particular, there is a subtle mathematical argument showing that the metal-insulator transition it allows for is completely independent of energy. It turns out that you have to do a little something extra to allow for a mobility edge to arise. In our case, the extra ingredient was creating the large magnetic fields.”

In this research, the scientists also showed evidence for an even more intriguing kind of mobility edge that occurred in the absence of the artificial magnetic fields. This second type of mobility edge came about due to atom-atom interactions, which caused the higher-energy states to behave more strongly like a metal and the lower-energy states to behave more strongly like an insulator.

“Going forward,” Gadway concludes, “the next extension of this work will be to explore the interplay of disorder and large magnetic fields in truly two-dimensional systems, not just two coupled chains. This will build on work we’ve been doing on disordered topological insulators in 1D, extending it to the case of disordered quantum Hall systems in 2D.”