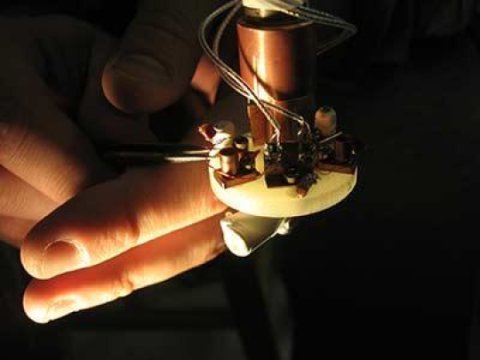 Measuring the properties of superconducting materials in magnetic fields at close to absolute zero temperatures is difficult, but necessary to understand their quantum properties.

“For many modern (quantum) materials, to properly study the fine details of their quantum mechanical behavior you need to be cool. Cooler than was formerly thought possible,” said Ruslan Prozorov, a physicist at the U.S. Department of Energy’s Ames Laboratory, who specializes in developing instrumentation which measures just such things.

Prozorov and his research team have developed a method to measure magnetic properties of superconducting and magnetic materials that exhibit unusual quantum behavior at very low temperatures in high magnetic fields. The method is being used to study quantum critical behavior, mechanisms of superconductivity, magnetic frustration and phase transitions in materials, many of which were first fabricated at Ames Laboratory.

They did so by placing a tunnel diode resonator, an instrument that makes precise radio-frequency measurements of magnetic properties, in a dilution refrigerator, a cryogenic device that is able to cool samples down to milli-Kelvin temperature range. While this was already achieved before, previous works did not have the ability to apply large static magnetic fields, which is crucial for studying quantum materials.

Prozorov’s group worked to overcome the technical difficulties of maintaining high-resolution magnetic measurements, while at the same time achieving ultra-cold temperatures down to 0.05 K and in magnetic fields up to 14 tesla. A similar circuit has already been used in a very high magnetic field (60 T) when the team performed the experiments at Los Alamos National Lab.

“When we first installed the dilution refrigerator, the joke was that my lab had the coldest temperatures in Iowa,” said Prozorov, who conducts his research where Midwestern winters are no laughing matter. “But we were not doing this just for fun, to see how cold we could go. Many unusual quantum properties of materials can only be uncovered at these extremely low temperatures.”

The group studied pairing symmetry in several unconventional superconductors, mapped a very complex phase diagram in a system with field-induced quantum critical behavior, and recently uncovered very unusual properties of a spin-ice system, “none of which would be possible without this setup,” said Prozorov.