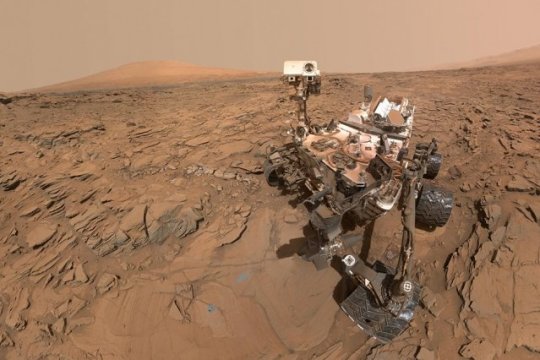 Selecting a landing site for a rover headed to Mars is a lengthy process that normally involves large committees of scientists and engineers. These committees typically spend several years weighing a mission’s science objectives against a vehicle’s engineering constraints, to identify sites that are both scientifically interesting and safe to land on.

For instance, a mission’s science team may want to explore certain geological sites for signs of water, life, and habitability. But engineers may find that those sites are too steep for a vehicle to land safely, or the locations may not receive enough sunlight to power the vehicle’s solar panels once it has landed. Finding a suitable landing site therefore involves piecing together information collected over the years by past Mars missions. These data, though growing with each mission, are patchy and incomplete.

Now researchers at MIT have developed a software tool for computer-aided discovery that could help mission planners make these decisions. It automatically produces maps of favorable landing sites, using the available data on Mars’ geology and terrain, as well as a list of scientific priorities and engineering constraints that a user can specify.

As an example, a user can stipulate that a rover should land in a site where it can explore certain geological targets, such as open-basin lakes. At the same time, the landing site should not exceed a certain slope, otherwise the vehicle would topple over while attempting to land. The program then generates a “favorability map” of landing sites that meet both constraints. These locations can shift and change as a user adds additional specifications.

The program can also lay out possible paths that a rover can take from a given landing site to certain geological features. For instance, if a user specifies that a rover should explore sedimentary rock exposures, the program produces paths to any such nearby structures and calculates the time that it would take to reach them.

“This is never going to replace the actual committee, but it can make things much more efficient, because you can play with different scenarios while you’re talking,” Pankratius says.

The team’s study was published online on Aug. 31 by Earth and Space Science and is part of the journal’s Sept. 8 online issue.

Pankratius and postdoc Guillaume Rongier, in MIT’s Department of Earth, Atmospheric and Planetary Sciences, created the program to identify favorable landing sites for a conceptual mission similar to NASA’s Mars 2020 rover, which is engineered to land in horizontal, even, dust-free areas and aims to explore an ancient, potentially habitable, site with magmatic outcrops.

They found the program identified many landing sites for the rover that have been considered in the past, and it highlighted other promising landing sites that were rarely proposed. “We see there are sites we could explore with existing rover technologies, that landing site committees may want to reconsider,” Pankratius says.

The program could also be used to explore engineering requirements for future generations of Mars rovers. “Assuming you can land on steeper curves, or drive faster, then we can derive which new regions you can explore,” Pankratius says.

The software relies partly on “fuzzy logic,” a mathematical logic scheme that groups things not in a binary fashion like Boolean logic, such as yes/no, true/false, or safe/unsafe, but in a more fluid, probability-based fashion.

“Traditionally this idea comes from mathematics, where instead of saying an element belongs to a set, yes or no, fuzzy logic says it belongs with a certain probability,” thus reflecting incomplete or imprecise information, Pankratius explains.

In the context of finding a suitable landing site, the program calculates the probability that a rover can climb a certain slope, with the probability decreasing as the a location becomes more steep.

“With fuzzy logic we can expresses this probability spatially — how bad is it if I’m this steep, versus this steep,” Pankratius says. “It’s is a way to deal with imprecision, in a way.”

Using algorithms related to fuzzy logic, the team creates raw, or initial, favorability maps of possible landing sites over the entire planet. These maps are gridded into individual cells, each representing about 3 square kilometers on the surface of Mars. The program calculates, for each cell, the probability that it is a favorable landing site, and generates a map that is color-graded to represent probabilities between 0 and 1. Darker cells represent sites with a near-zero probability of being a favorable landing site, while lighter locations have a higher chance of a safe landing with interesting scientific prospects.

Once they generate a raw map of possible landing sites, the researchers take into account various uncertainties in the landing location, such as changes in trajectory and potential navigation errors during descent. Considering these uncertainties, the program then generates landing ellipses, or circular targets where a rover is likely to land to maximize safety and scientific exploration.

The program also uses an algorithm known as fast marching to chart out paths that a rover can take over a given terrain once it’s landed. Fast marching is typically used to calculate the propagation of a front, such as how fast a front of wind reaches a shore if traveling at a given speed. For the first time, Pankratius and Rongier applied fast marching to compute a rover’s travel time as it travels from a starting point to a geological structure of interest.

“If you are somewhere on Mars and you get this processed map, you can ask, ‘From here, how fast can I go to any point in my surroundings? And this algorithm will tell you,” Pankratius says.

The algorithm can also map out routes to avoid certain obstacles that may slow down a rover’s trip, and chart out probabilities of hitting certain types of geological structures in a landing area.

“It’s more difficult for a rover to drive through dust, so it’ll go at a slower pace, and dust isn’t necessarily everywhere, just in patches,” Rongier says. “The algorithm will consider such obstacles when mapping out the fastest traverse paths.”

The teams says operators of current rovers on the Martian surface can use the software program to direct the vehicles more efficiently to sites of scientific interest. In the future, Pankratius envisions this technique or something similar to be integrated into increasingly autonomous rovers that don’t require humans to operate the vehicles all the time from Earth.

“One day, if we have fully autonomous rovers, they can factor in all these things to know where they can go, and be able to adapt to unforeseen situations,” Pankratius says. “You want autonomy, otherwise it can take a long time to communicate back and forth when you have to make critical decisions quickly.”

The team is also looking into applications of the techniques in geothermal site exploration on Earth in collaboration with the MIT Earth Resources Lab in the Department of Earth, Atmospheric and Planetary Sciences.

“It’s a very similar problem,” Pankratius says. “Instead of saying ‘Is this a good site, yes or no?’ you can say, ‘Show me a map of all the areas that would likely be viable for geothermal exploration.'”

As data improve, both for Mars and for geothermal structures on Earth, he says that that data can be fed into the existing program to provide more accurate analyses.

“The program is incrementally enhanceable,” he says.

This research was funded, in part, by NASA and the National Science Foundation.