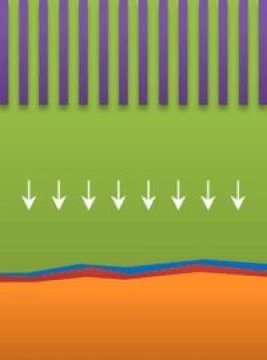 As our love of gadgets grows, so do demands for longer lasting batteries. But there’s a problem.

To make a longer-lasting battery, it needs to be bigger, and bigger isn’t better when it comes to cell phones or electric cars — not to mention pacemakers.

Lithium ion batteries already have a less-than-stellar reputation: think exploding cell phones or fires on airplanes. Beyond these existing problems, when researchers attempt to shrink these batteries without compromising the performance, the results are even more unstable and prone to short-circuiting; engineers have not been able to move past these issues.

Researchers at Washington University in St. Louis have new insights into the cause — or causes — of these issues, paving the way for smaller, safer, more energy-dense batteries. The result of their work has recently been published online in the journal Joule.

Peng Bai, assistant professor in the School of Engineering & Applied Science, has identified three key current boundaries when it comes to these energy-dense lithium metal batteries. It turns out, engineers had been looking for one solution to what turns out to be three problems.

The separator is wetted by a liquid called an electrolyte. When the battery discharges, lithium ions empty out of the anode, passing through the liquid electrolyte, and move into the cathode. The process is reversed as the battery charges.

“With half of the lithium-ion-hosting electrode materials empty at all times,” Bai said, “you are wasting half of your space.”

Engineers have known that they could build a more energy-dense battery (a smaller battery with a similar output capabilities) by discarding some of the dead weight that comes with half of the host materials always being empty. They have been minimally successful by removing the graphite anode, then reducing the lithium ions with electrons during recharge, a process which forms a thin plating of lithium metal.

“The problem is that the lithium metal plating is not uniform,” Bai said. “It can grow ‘fingers.’ “

Researchers have referred to these fingers as “dendrites.” As they spread from the lithium metal plating, they can penetrate the separator in the battery, leading to a short circuit.

But not all “fingers” are the same. “If you call them all dendrites, you’re looking for one solution to solve actually three problems, which is impossible,” Bai said. “That’s why after so many years this problem has never been solved.”

His team has identified three distinct types of fingers, or growth modes, in these lithium metal anodes. They also outline at which current each growth mode appears.

“If you use very high current, it builds at the tip to produce a treelike structure,” Bai said. Those are “true dendrites.”

Below the lower limit you have whiskers growing from the root.

And within those two limits there exists the dynamic transition from whiskers to dendrites, which Bai calls “surface growth.”

These growths are all related to the competing reactions in the region between the liquid electrolyte and the metal deposits.

At this point, Bai said, “our unique transparent cell revealed that the voltage of battery could look quite normal, even though the separator has been penetrated by a lithium metal filament. Without seeing what is happening inside, you could be easily fooled by the seemingly reasonable voltage, but, really, your battery has already failed.”

In order to build a safe, efficient, reliable battery with a lithium metal anode, the three growth modes need to be controlled by three different methods.

This will be a challenge considering consumers want batteries that can store more energy, and at the same time want them to be charged more quickly. The combination of these two inevitably yields a higher and higher charging current, which may exceed one of the critical currents identified by Bai’s team.

And, batteries can degrade. When they do, the critical currents identified for the fresh battery no longer apply; the threshold becomes lower. At that point, given the same fast charge current, there’s a higher likelihood that the battery will short.

“Battery operation is highly dynamic, in a very wide range of currents. Yet its disposition varies dramatically along the cycle life” Bai said. “That is why this becomes necessary.”