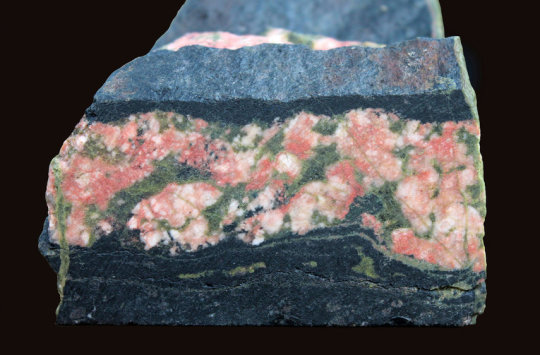 Scientists have found that 4.02-billion-year-old silica-rich felsic rocks from the Acasta River, Canada — the oldest rock formation known on Earth — probably formed at high temperatures and at a surprisingly shallow depth of the planet’s nascent crust. The high temperatures needed to melt the shallow crust were likely caused by a meteorite bombardment around half a billion years after the planet formed. This melted the iron-rich crust and formed the granites we see today. These results are presented for the first time at the Goldschmidt conference in Boston (14 August), following publication in the peer-reviewed journal Nature Geoscience.

The felsic rocks (rocks rich in silica/quartz) found at the Acasta River in Canada, are the Earth’s oldest rocks, although there are older mineral crystals*. Scientists have long known that the Acasta rocks are different to the majority of felsic rocks we see today, such as the granites widely used as a building or decorative material. Now a group of scientists from Australia and China have modelled the formation of the oldest Acasta felsic rocks and found that they could only have been formed at low pressures and very high temperatures.

Scientists believe that the primitive crust largely comprised dark, silica-poor mafic rocks, so there has been a question over how the Acasta River felsic rocks could have formed.

“Our modelling shows that the Acasta River rocks derived from the melting of pre-existing iron-rich basaltic rock, which formed the uppermost layers of crust on the primitive Earth,” said team leader Tim Johnson, from Curtin University, Perth.

“We used phase equilibria and trace element modelling to show that the Acasta River rocks were produced by partial melting of the original mafic rocks at very low pressures. It would have needed something special to produce the 900°C temperatures needed to generate these early felsic rocks at such low pressures, and that probably means a drastic event, most likely the intense heating caused by meteorite bombardment.

We estimate that rocks within the uppermost 3km of mafic crust would have been melted in producing the rocks we see today. We think that these ancient felsic rocks would have been very common, but the passage of 4 billion years, and the development of plate tectonics, means that almost nothing remains.

We believe that these rocks may be the only surviving remnants of a barrage of extraterrestial impacts which characterized the first 600 million years of Earth History.”

The Acasta River is part of the Slave Craton formation in Northern Canada, north of Yellowknife and the Great Slave Lake. The area is the homeland of the Tlicho people, which led to the geologists who discovered the rocks giving them the name “Idiwhaa,” derived from the Tlicho word for ancient.

Commenting, Dr Balz Kamber (Trinity College Dublin) said: “The idea of making felsic melts by large or giant impacts seems plausible considering the high-energy nature of these events and the pockmarked ancient surfaces of other inner Solar System planets and moons. However, the implied pressure-temperature regime might also permit melting of shallow crust below a super-heated impact melt sea. In other words, an indirect consequence of the impact itself.”

* Rocks from Jack Hills in Australia contain zircon crystals from up to 4.4 billion years ago, embedded in younger rocks.