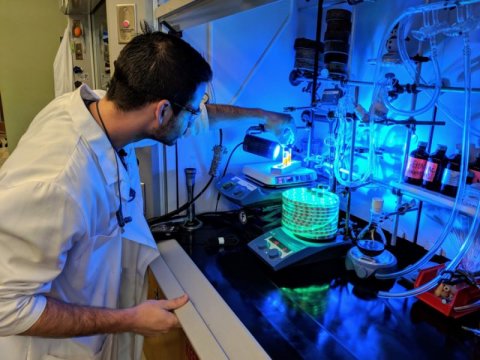 Chemists at The Ohio State University have developed a new and improved way to generate molecules that can enable the design of new types of synthetic drugs.

Researchers say this new method of forming reactive intermediates called ketyl radicals offers scientists a way to use catalysts to convert simple molecules into complex structures in one chemical reaction. This is done in a less harsh, more sustainable and waste-free manner.

“The previous strategy for creating ketyl radicals is about a century old. We have a found a complementary way to access ketyl radicals using LED lights for the synthesis of complex, drug-like molecules,” said David Nagib, co-author of the new study and assistant professor of chemistry and biochemistry at Ohio State. The study was published Oct. 12 in the journal Science.

The story starts with carbonyls, compounds that function as one of the most common building blocks in creating potential new drugs. Unlike classic carbonyl chemistry taught in introductory organic textbooks, when carbonyls are converted to their “radical” form, they become much more reactive. These radicals, containing an unpaired electron desperately seeking its partner, enable researchers to form new bonds, in order to create complex, drug-like products.

Until now, ketyl radical formation has required strong, harsh substances called reductants, like sodium or samarium, to act as catalysts. These reductants can be toxic, expensive and incompatible with creating medicines, Nagib said.

In this study, the researchers found a way to use manganese as a catalyst that could be activated with a simple LED light.

“Manganese is very cheap and abundant, which makes it an excellent catalyst,” he said. “Also, it allows us to access radicals by a complementary atom-transfer mechanism, rather than the classic electron-transfer mechanism.”

Not only is manganese cheaper and more abundant, it actually is more selective in creating products with defined geometries, so they can fit into drug targets, the study found. The process is less wasteful, as well, recycling the iodine atom used to make the radicals by including it in the more functional products.

This new method to generate ketyl radicals enables researchers to create more versatile and complex structures that could be useful in generating new medicines, Nagib said.

Co-authors of the study, all from Nagib’s lab at Ohio State, are Lu Wang, Jeremy Lear, Sean Rafferty and Stacy Fosu. Wang, a lead scientist on this project, recently completed her postdoctoral fellowship and now works for Merck, a major pharmaceutical company.