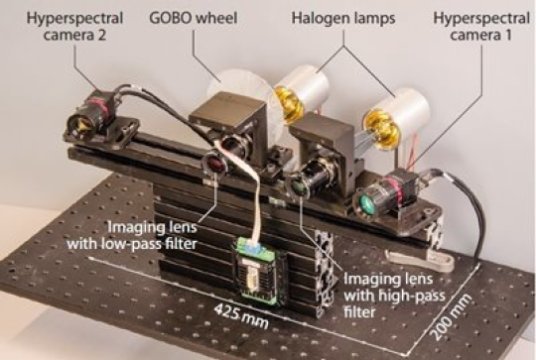 Researchers have developed a compact imaging system that can measure the shape and light-reflection properties of objects with high speed and accuracy. This 5D hyperspectral imaging system — so-called because it captures multiple wavelengths of light plus spatial coordinates as a function of time — could benefit a variety of applications including optical-based sorting of products and identifying people in secure areas of airports. With further miniaturization, the imager could enable smartphone-based inspection of fruit ripeness, or personal medical monitoring.

What’s more, “because our imaging system doesn’t require contact with the object, it can be used to record historically valuable artifacts or artwork,” said research team leader Stefan Heist of Friedrich Schiller University Jena and Fraunhofer Institute for Applied Optics and Precision Engineering, Germany. This can be used to create a detailed and accurate digital archive, he added, while also allowing study of the object’s material composition.

Hyperspectral imagers detect dozens to hundreds of colors, or wavelengths, instead of the three detected by normal cameras. Each pixel of a traditional hyperspectral image contains wavelength-dependent radiation intensity over a specific range linked to two-dimensional coordinates.

The new hyperspectral imaging system, developed in collaboration with Gunther Notni’s research group from Germany’s Ilmenau University of Technology, advances this imaging approach by acquiring additional dimension information. In The Optical Society (OSA) journal Optics Express, researchers describe how each pixel acquired by their new 5D hyperspectral imager contains the time; x, y and z spatial coordinates; and information based on light reflectance ranging from the visible to the near-infrared portion of the electromagnetic spectrum.

“State-of-the-art systems that aim to determine both the shape of the objects and their spectral properties are based on multiple sensors, offer low accuracy or require long measurement times,” said Heist. “In contrast, our approach combines excellent spatial and spectral resolution, great depth accuracy and high frame rates in a single compact system.”

The researchers created a prototype system with a footprint of just 200 by 425 millimeters — about the size of a laptop. It uses two hyperspectral snapshot cameras to form 3D images and obtain depth information much like our eyes do by capturing a scene from two slightly different directions. By identifying particular points on the object’s surface that are present in both camera views, a complete set of data points in space for that object can be created. However, this approach only works if the object has enough texture or structure to unambiguously identify points.

To capture both spectral information and the surface shape of objects that may not be highly texturized or structured the researchers incorporated a specially developed high-speed projector into their system. Using a mechanical projection method, a series of aperiodic light patterns are used to artificially texture the object surface. This allows robust and accurate 3D reconstruction of the surface. The spectral information obtained by the different channels of the hyperspectral cameras are then mapped onto these points.

“Our earlier development of a system projecting aperiodic patterns by a rotating wheel made it possible to project pattern sequences at potentially very high frame rates and outside the visible spectral range,” said Heist. “New hyperspectral snapshot cameras were also an important component because they allow spatially and spectrally resolved information to be captured in a single image, without any scanning.”

The researchers characterized their prototype by analyzing the spectral behavior of the cameras and the 3D performance of the entire system. They showed that it could capture visible to near-infrared 5D images as fast as 17 frames per second, significantly faster than other similar systems.

To demonstrate the usefulness of the prototype to analyze culturally significant objects, the researchers used it to digitally document a historical relief globe from 1885. They also created near-infrared 5D models of a person’s hand and showed that the system could be used as a simple way to detect veins. The imager could also be used for agricultural applications, which the researchers showed by using it to capture the 5D change in reflection spectrum of citrus plant leaves as they were absorbing water.

The researchers plan to optimize their prototype by using hyperspectral cameras with a higher signal-to-noise ratio or that exhibit less crosstalk between the different spectral channels. Ideally, the system would be tailored to specific applications. For example, cameras with high imaging rates could be used to analyze dynamically changing object properties, while using sensors with high resolution in the infrared wavelength might be useful for detecting chemical leaks.