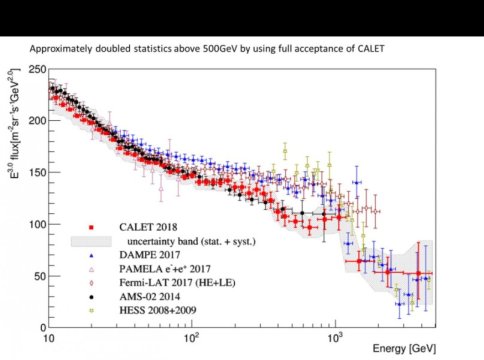 An international team of researchers succeeded in extending their result from a previous study and directly measured the cosmic-ray all-electron (electron + positron) spectrum in an energy range from 11 GeV to 4.8 TeV with the Calorimetric Electron Telescope (CALET).

CALET, a detector optimized to observe high-energy electrons, was installed on the Japanese Experimental Module Kibo on the International Space Station (ISS) on August 2015 as the first, Japanese-led, space-based mission dedicated to cosmic ray observations. Intended for a long-term operation, CALET has been accumulating data since October 2015.

“I have been told that the international scientific community is interested in the observations by CALET because one of our objectives is to understand the origin of high-energy cosmic rays and the nature of dark matter, some of the most profound mysteries in this universe,” says Professor Shoji Torii of Waseda University, the principal investigator of the CALET mission.

The origin and acceleration of cosmic rays are not yet well known, and cosmic-ray electrons are one of the priority targets of high-energy cosmic ray research. Precise measurements of electrons above 1 TeV have been difficult to achieve because they require high-precision energy measurements of the cosmic-ray particles, sensitivity to detect the rare electron flux, and capability of accurate electron identification from the more than 1,000 times higher flux of protons in the TeV energy region.

“The long-term observations on the ISS and the calorimeter of CALET’s capabilities, such as being able to identify the charge of incident particles, detect incident direction, and measure the particle energy and identify the species by detecting the particle shower development, have enabled our team to perform accurate measurements of cosmic-ray electrons into the TeV region,” Professor Torii explains. Previously in November 2017, the team reported their first result in measuring the cosmic-ray electrons in the energy range from 10 GeV to 3 TeV in Physical Review Letters.

In this recent study, they developed a new data analysis method to maximize detection at higher energies, approximately doubling the statistics compared to their previous study and allowing CALET to obtain high-precision measurements of cosmic-ray electron spectrum up to 4.8 TeV.

Professor Torii says that the statistics will improve nearly three times more than now by using data after a five-year observation. “It will also reduce systematic uncertainties, including that from the detector response. Our ultimate goal is to push the energy limit up to 20 TeV and obtain the precise energy spectrum, in which there is a high probability of discovering nearby astrophysical cosmic-ray resources or revealing the nature of dark matter.”

Materials provided by Waseda University. Note: Content may be edited for style and length.