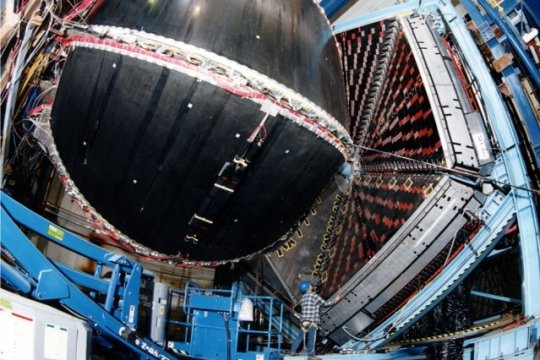 Neutron stars are the smallest, densest stars in the universe, born out of the gravitational collapse of extremely massive stars. True to their name, neutron stars are composed almost entirely of neutrons — neutral subatomic particles that have been compressed into a small, incredibly dense celestial package.

A new study in Nature, co-led by MIT researchers, suggests that some properties of neutron stars may be influenced not only by their multitude of densely packed neutrons, but also by a substantially smaller fraction of protons — positively charged particles that make up just 5 percent of a neutron star.

Instead of gazing at the stars, the researchers came to their conclusion by analyzing the microscopic nuclei of atoms on Earth.

The nucleus of an atom is packed with protons and neutrons, though not quite as densely as in neutron stars. Occasionally, if they are close enough in distance, a proton and a neutron will pair up and streak through an atom’s nucleus with unusually high energy. Such “short-range correlations,” as they are known, can contribute significantly to the energy balance and overall properties of a given atomic nucleus.

The researchers looked for signs of proton and neutron pairs in atoms of carbon, aluminum, iron, and lead, each with a progressively higher ratio of neutrons to protons. They found that, as the relative number of neutrons in an atom increased, so did the probability that a proton would form an energetic pair. The likelihood that a neutron would pair up, however, stayed about the same. This trend suggests that, in objects with high densities of neutrons, the minority protons carry a disproportionally large part of the average energy.

“We think that when you have a neutron-rich nucleus, on average, the protons move faster than the neutrons, so in some sense, protons carry the action,” says study co-author Or Hen, assistant professor of physics at MIT. “We can only imagine what might happen in even more neutron-dense objects like neutron stars. Even though protons are the minority in the star, we think the minority rules. Protons seem to be very active, and we think they might determine several properties of the star.”

Hen and his colleagues based their study on data collected by CLAS — the CEBAF (Continuous Electron Beam Accelerator Facility) Large Acceptance Spectrometer, a particle accelerator and detector based at Jefferson Laboratory in Virginia. CLAS, which operated from 1998 to 2012, was designed to detect and record the multiple particles that are emitted when beams of electrons impinge on atomic targets.

“Having this property of a detector that sees everything and also keeps everything for offline analysis is extremely rare,” Hen says. “It even has kept what people considered ‘noise,’ and we’re now learning that one person’s noise is another person’s signal.”

The team chose to mine CLAF’s archived data for signs of short-range correlations — interactions that the detector was not necessarily meant to produce, but that it captured nonetheless.

“People were using the detector to look at specific interactions, but meanwhile, it also measured in parallel a bunch of other reactions that took place,” says collaborator Larry Weinstein, a professor of physics at Old Dominion University. “So we thought, ‘Let’s dig into this data and see if there’s anything interesting there.’ We want to squeeze as much science as we can out of experiments that have already run.”

The team chose to mine CLAS data collected in 2004, during an experiment in which the detector aimed beams of electrons at carbon, aluminum, iron, and lead atoms, with the goal of observing how particles produced in nuclear interactions travel through each atom’s respectively larger volume. Along with their varying sizes, each of the four types of atoms have different ratios of neutrons to protons in their nuclei, with carbon having the fewest neutrons and lead having the most.

The reanalysis of the data was done by graduate student Meytal Duer from Tel Aviv University in a collaboration with MIT and Old Dominion University, and was led by Hen. The overall study was conducted by an international consortium called the CLAS Collaboration, made up of 182 members from 42 institutions in 9 countries.

The group studied the data for signs of high-energy protons and neutrons — indications that the particles had paired up — and whether the probability of this pairing changed as the ratio of neutrons to protons increased.

“We wanted to start from a symmetric nucleus and see, as we add more neutrons, how things evolve,” Hen says. “We would never get to the symmetries of neutron stars here on Earth, but we could at least see some trend and understand from that, what could be going on in the star.”

In the end, the team observed that as the number of neutrons in an atom’s nucleus increased, the probability of protons having high energies (and having paired up with a neutron) also increased significantly, while the same probability for neutrons remained the same.

“The analogy we like to give is that it’s like going to a dance party,” Hen says, invoking a scenario in which boys who might pair up with girls on the dance floor are vastly outnumbered. “What would happen is, the average boy would … dance a lot more, so even though they were a minority in the party, the boys, like the protons, would be extremely active.”

Hen says this trend of energetic protons in neutron-rich atoms may extend to even more neutron-dense objects, such as neutron stars. The role of protons in these extreme objects may then be more significant than people previously suspected. This revelation, Hen says, may shake up scientists’ understanding of how neutron stars behave. For instance, as protons may carry substantially more energy than previously thought, they may contribute to properties of a neutron star such as its stiffness, its ratio of mass to size, and its process of cooling.

“All these properties then affect how two neutron stars merge together, which we think is one of the main processes in the universe that create nuclei heavier than iron, such as gold,” Hen says. “Now that we know the small fraction of protons in the star are very highly correlated, we will have to rethink how [neutron stars] behave.”