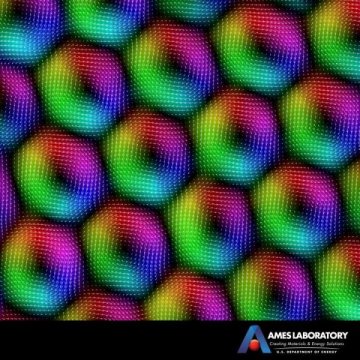 Scientists at the U.S. Department of Energy’s Ames Laboratory have discovered the relaxation dynamics of a zero-field state in skyrmions, a spinning magnetic phenomenon that has potential applications in data storage and spintronic devices.

Skyrmions are nanoscale whirls or vortices of magnetic poles that form lattices within a magnetic material, a type of quasiparticle that can zip across the material, pushed by electrical current. Those properties have captured the fascination of scientists, who think the phenomenon could lead to the next big advance in data storage, making digital technology even faster and smaller.

There are some big challenges to overcome, however. Until recently skyrmions were a phenomenon only observed at extreme low temperature. Also, external magnetic forces makes them currently impractical for applications.

“In order to be really useful in a device, these magnetic vortices need to be able to exist without the ‘help’ of an external magnetic field,” said Lin Zhou, a scientist in the Ames Laboratory’s Division of Materials Sciences and Engineering.

With that in mind, she and other researchers at Ames Laboratory investigated FeGe, an iron-germanium magnetic material that has demonstrated skyrmions in the highest temperature ranges to date in crystals with a similar, or B20 structure.

Ames Lab scientists with external collaborators were able to establish a skyrmion lattice in a sample through exposure to magnetic fields and supercooling with liquid nitrogen. With a high resolution microscopy method called Lorentz transmission electron microscopy (L-TEM), the team was able to observe the skyrmion lattice in zero magnetic field, and then observe the decay of the skyrmions as the temperature warmed. This direct observation yielded critical new information about how skyrmions behave and how they revert back to a ‘normal’ (what scientists call metastable) magnetic state.

“We’ve stabilized these skyrmions without a magnetic field, and our microscopy techniques allowed us to really see how the vortices change over time, temperature, and magnetic field; we think it provides a very solid foundation for theorists to better understand this phenomenon,” Zhou said.