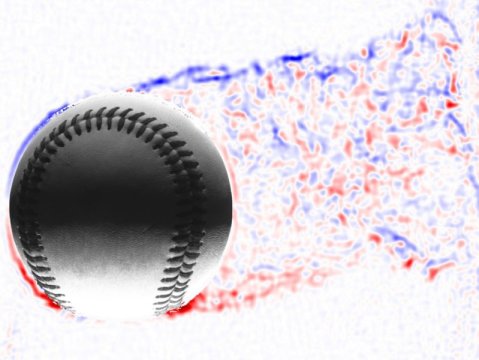 An unexpected twist from a four-seam or a two-seam fastball can make the difference in a baseball team winning or losing the World Series. However, “some explanations regarding the different pitches are flat-out wrong,” said Barton Smith, a professor of mechanical and aerospace engineering at Utah State University who considers himself a big fan of the game.

He and his doctoral student, Nazmus Sakib, are conducting experiments to explain how baseballs move. Sakib and Smith will present their findings at the American Physical Society’s Division of Fluid Dynamics 71st Annual Meeting, which will take place Nov. 18-20 at the Georgia World Congress Center in Atlanta, Georgia.

A baseball is asymmetric owing to the figure-eight stitching pattern, and the way a baseball moves through the air depends on the degree and direction of its spin and its orientation when the hand releases it. The Magnus effect, or the force on a spinning object moving through a fluid like air, pushes in the direction that the front of the ball is spinning. So it causes a ball with topspin to drop and a ball with backspin to gain some lift — enough to slow its fall, but not enough to overcome gravity.

Sakib and Smith focus on these two pitches, which are influenced by forces other than the Magnus effect. In their study, the researchers set up a pitching machine that hurls fastballs and knuckleballs through a smoky path. Automatic photographs, triggered by laser sensors, captured two images of the ball and smoke after release. Then, using a technique called particle image velocimetry, Sakib and Smith tracked the movements of the smoke particles to compute the velocity field around the ball and the direction of the rotating air at a given spot.

Sakib and Smith found that the two-seam pitch has a tilted spin axis due to the fact that one finger leaves the seam before the other, which can cause the ball to move sideways, unlike a four-seam fastball. In the case of the knuckleball, the point of separation can change midflight, causing the ball to randomly shift directions.

Smith is now “hoping to meet a major league pitcher who wants to use what we’ve learned through fluid dynamics to throw a better pitch.”