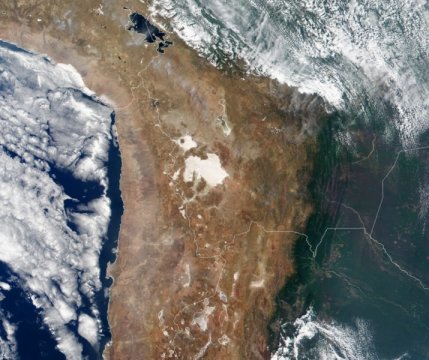 In his free time last summer, Rice University geoscientist Ming Tang made a habit of comparing the niobium content in various rocks in a global minerals database. What he found was worth skipping a few nights out with friends.

In a paper published this month by Nature Communications, Tang, Rice petrologist Cin-Ty Lee and colleagues offered an answer to one of Earth science’s fundamental questions: Where do continents form?

“If our conclusions are correct, every piece of land that we are now sitting on got its start someplace like the Andes or Tibet, with very mountainous surfaces,” said Tang, lead author of the study and a postdoctoral research associate in Rice’s Department of Earth, Environmental and Planetary Sciences (EEPS). “Today, most places are flat because that is the stable stage of the continental crust. But what we found was that when the crust formed, it had to start out with mountain-building processes.”

The connection between niobium, one of Earth’s rarest elements, and continent formation is a story that plays out over billions of years at scales as small as molecules and as large as mountain ranges. The leading players are niobium and tantalum, rare metals so alike that geologists often think of them as twins.

The mantle is Earth’s thickest layer, spanning about 1,800 miles between the planet’s core and its thin outer crust. Earth scientists believe that little, if anything, moves between the mantle and core, but the mantle and everything above it — seafloor, oceans, continents and atmosphere — are connected, and many of the atoms on Earth’s surface today, including the atoms in humans and other living things, have cycled through the mantle one or more times in Earth’s 4.6 billion years.

The rocks in continents are an exception. Geologists have found some that are up to 4 billion years old, which means they were formed near the surface and stayed on the surface, without being recycled into the mantle. That’s due in part to the nature of continental crust, which is far less dense than the basaltic rocks beneath Earth’s oceans. Lee, professor and EEPS department chair, said it’s no coincidence that Earth is the only rocky planet known to have both continents and life.

“Every day we live on continents, and we take most of our resources from continents,” Lee said. “We have oxygen in the air to breath and just the right temperature to support complex life. These things are so common that we take them for granted, but Earth didn’t start off with these conditions. They developed later in Earth’s history. And the emergence of continents is one of the things that shaped our planet and made it more livable.”

Scientists still lack details about how continents got their start and how they grew to cover 30 percent of Earth’s surface, but one big clue relates to niobium and tantalum, the geochemical twins.

“On average, the rocks in continental crust have about 20 percent less niobium than they should compared to the rock we see everywhere else,” Tang said. “We believe this missing niobium is tied to the mystery of continents. By solving or finding the missing the niobium, we can get important information about how continents form.”

Geologists have known about the imbalance for decades. And it certainly suggests that the geochemical processes that produce continental crust also remove niobium. But where was the missing niobium?

Based on those searches and months of follow-up tests, Tang, Lee and colleagues offer the first physical evidence that “arclogites” (pronounced ARC-loh-jyts) are responsible for the missing niobium. Arclogites are cumulates, the leftover dross that accumulates near the base of continental arcs. On rare occasions, chunks of these cumulates erupt onto the surface from volcanos.

The Rice group first sent arclogite samples that Lee had collected in Arizona to their collaborator, Kang Chen, a research fellow based at the China University of Geosciences in Wuhan. Chen spent a month getting precise readings of the relative amounts of niobium and tantalum in the samples. The rocks were created when the High Sierras were an active continental arc, like the Andes today.

Chen’s tests confirmed high niobium-tantalum ratios, but to better understand the mechanism by which this signature was developed, Tang and Lee used high precision laser ablation and “inductively coupled plasma mass spectrometry” in Lee’s laboratory at Rice to reveal the mineral rutile was responsible.

“Rutile is the mineral that hosts the niobium,” he said. “It’s a naturally occurring form of titanium oxide, and it is what actually ‘sees’ the difference between niobium and tantalum and captures one more than the other.”

But that happens only under specific conditions. For example, Tang said that at temperatures above 1,000 degrees Celsius, rutile traps normal ratios of tantalum and niobium. It only begins to prefer niobium when temperatures drop below 1,000 degrees Celsius. Tang said the only known place with that set of conditions is deep beneath continental arcs, like the Andes today or the High Sierras about 80 million years ago.

“The reason you need high pressure is that titanium oxide is relatively rare,” he said. “You need very high pressure to force it to crystalize and fall out of the magma.”

In an earlier arclogite study published in Science Advances last May, Tang and Lee discovered a subtle chemical signature that can explain why continental crust is iron-depleted. Lee said that finding and the discovery about rutile and niobium illustrate the central importance of continental arcs in Earth history.

“Continental arcs are like a magic system that links everything together, from climate and oxygen concentrations in the atmosphere to ore deposits,” Lee said. “They’re a sink for carbon dioxide after they die. They can drive greenhouse or icehouse, and they are the building blocks of continents.”