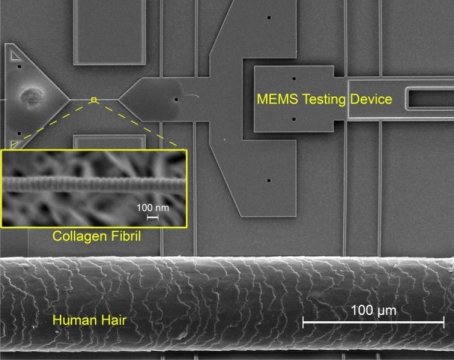 Collagen is the fundamental building block of muscles, tissues, tendons, and ligaments in mammals. It is also widely used in reconstructive and cosmetic surgery. Although scientists have a good understanding about how it behaves at the tissue-level, some key mechanical properties of collagen at the nanoscale still remain elusive. A recent experimental study conducted by researchers at the University of Illinois at Urbana-Champaign, Washington University, and Columbia University on nanoscale collagen fibrils reported on previously unforeseen reasons why collagen is such a resilient material.

Because one collagen fibril is about one millionth in size of the cross-section of a human hair, studying it requires equally small equipment. The group in the Department of Aerospace Engineering at U of I designed tiny devices — Micro-Electro-Mechanical Systems — smaller than one millimeter in size, to test the collagen fibrils.

“Using MEMS-type devices to grip the collagen fibrils under a high magnification optical microscope, we stretched individual fibrils to learn how they deform and the point at which they break,” said Debashish Das, a postdoctoral scholar at Illinois who worked on the project. “We also repeatedly stretched and released the fibrils to measure their elastic and inelastic properties and how they respond to repeated loading.”

Das explained, “Unlike a rubber band, if you stretch human or animal tissue and then release it, the tissue doesn’t spring back to its original shape immediately. Some of the energy expended in pulling it is dissipated and lost. Our tissues are good at dissipating energy-when pulled and pushed, they dissipate a lot of energy without failing. This behavior has been known and understood at the tissue-level and attributed to either nanofibrillar sliding or to the gel-like hydrophilic substance between collagen fibrils. The individual collagen fibrils were not considered as major contributors to the overall viscoelastic behavior. But now we have shown that dissipative tissue mechanisms are active even at the scale of a single collagen fibril.”

A very interesting and unexpected finding of the study is that collagen fibrils can become stronger and tougher when they are repeatedly stretched and let to relax.

“If we repeatedly stretch and relax a common engineering structure, it is more likely to become weaker due to fatigue,” said U of I Professor Ioannis Chasiotis. “While our body tissues don’t experience anywhere near the amount of stress we applied to individual collagen fibrils in our lab experiments, we found that after crossing a threshold strain in our cyclic loading experiments, there was a clear increase in fibril strength, by as much as 70 percent.”

Das said the collagen fibrils themselves contribute significantly to the energy dissipation and toughness observed in tissues.

“What we found is that individual collagen fibrils are highly dissipative biopolymer structures. From this study, we now know that our body dissipates energy at all levels, down to the smallest building blocks. And properties such as strength and toughness are not static, they can increase as the collagen fibrils are exercised,” Das said.

What’s the next step? Das said with this new understanding of the properties of single collagen fibrils, scientists may be able to design better dissipative synthetic biopolymer networks for wound healing and tissue growth, for example, which would be both biocompatible and biodegradable.