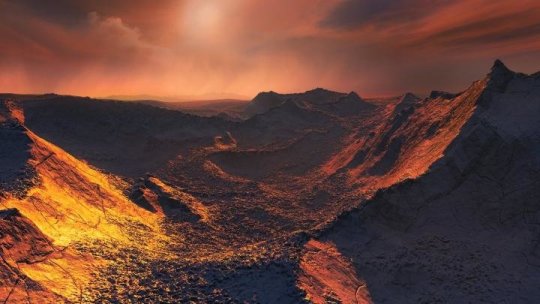 A planet has been detected orbiting Barnard’s Star , a mere 6 light-years away. This breakthrough — announced in a paper published today in the journal Nature — is a result of the Red Dots and CARMENES projects, whose search for local rocky planets has already uncovered a new world orbiting our nearest neighbour, Proxima Centauri.

The planet, designated Barnard’s Star b, now steps in as the second-closest known exoplanet to Earth [1]. The gathered data indicate that the planet could be a super-Earth, having a mass at least 3.2 times that of the Earth, which orbits its host star in roughly 233 days. Barnard’s Star, the planet’s host star, is a red dwarf, a cool, low-mass star, which only dimly illuminates this newly-discovered world. Light from Barnard’s Star provides its planet with only 2% of the energy the Earth receives from the Sun.

Despite being relatively close to its parent star — at a distance only 0.4 times that between Earth and the Sun — the exoplanet lies close to the snow line, the region where volatile compounds such as water can condense into solid ice. This freezing, shadowy world could have a temperature of -170℃, making it inhospitable for life as we know it.

Named for astronomer E. E. Barnard, Barnard’s Star is the closest single star to the Sun. While the star itself is ancient — probably twice the age of our Sun — and relatively inactive, it also has the fastest apparent motion of any star in the night sky [2]. Super-Earths are the most common type of planet to form around low-mass stars such as Barnard’s Star, lending credibility to this newly discovered planetary candidate. Furthermore, current theories of planetary formation predict that the snow line is the ideal location for such planets to form.

Previous searches for a planet around Barnard’s Star have had disappointing results — this recent breakthrough was possible only by combining measurements from several high-precision instruments mounted on telescopes all over the world [3].

“After a very careful analysis, we are 99% confident that the planet is there,” stated the team’s lead scientist, Ignasi Ribas (Institute of Space Studies of Catalonia and the Institute of Space Sciences, CSIC in Spain). “However, we’ll continue to observe this fast-moving star to exclude possible, but improbable, natural variations of the stellar brightness which could masquerade as a planet.”

Among the instruments used were ESO’s famous planet-hunting HARPS and UVES spectrographs. “HARPS played a vital part in this project. We combined archival data from other teams with new, overlapping, measurements of Barnard’s star from different facilities,” commented Guillem Anglada Escudé (Queen Mary University of London), co-lead scientist of the team behind this result. “The combination of instruments was key to allowing us to cross-check our result.”

Astronomers take advantage of this effect to measure the changes in a star’s velocity due to an orbiting exoplanet — with astounding accuracy. HARPS can detect changes in the star’s velocity as small as 3.5 km/h — about walking pace. This approach to exoplanet hunting is known as the radial velocity method, and has never before been used to detect a similar super-Earth type exoplanet in such a large orbit around its star.

“We used observations from seven different instruments, spanning 20 years of measurements, making this one of the largest and most extensive datasets ever used for precise radial velocity studies.” explained Ribas. “The combination of all data led to a total of 771 measurements — a huge amount of information!”

“We have all worked very hard on this breakthrough,” concluded Anglada-Escudé. “This discovery is the result of a large collaboration organised in the context of the Red Dots project, that included contributions from teams all over the world. Follow-up observations are already underway at different observatories worldwide.”

[1] The only stars closer to the Sun make up the triple star system Alpha Centauri. In 2016, astronomers using ESO telescopes and other facilities found clear evidence of a planet orbiting the closest star to Earth in this system, Proxima Centauri. That planet lies just over 4 light-years from Earth, and was discovered by a team led by Guillem Anglada Escudé.

[2] The total velocity of Barnard’s Star with respect to the Sun is about 500,000 km/h. Despite this blistering pace, it is not the fastest known star. What makes the star’s motion noteworthy is how fast it appears to move across the night sky as seen from the Earth, known as its apparent motion. Barnard’s Star travels a distance equivalent to the Moon’s diameter across the sky every 180 years — while this may not seem like much, it is by far the fastest apparent motion of any star.