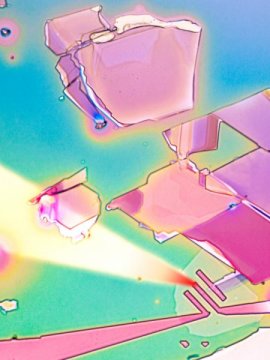 An international team of researchers has reported a breakthrough in fabricating atom-thin processors — a discovery that could have far-reaching impacts on nanoscale chip production and in labs across the globe where scientists are exploring 2D materials for ever-smaller and -faster semiconductors.

The team, headed by New York University Tandon School of Engineering Professor of Chemical and Biomolecular Engineering Elisa Riedo, outlined the research results in the latest issue of Nature Electronics.

First, thermal lithography significantly improves the quality of the 2D transistors, offsetting the Schottky barrier, which hampers the flow of electrons at the intersection of metal and the 2D substrate. Also, unlike EBL, the thermal lithography allows chip designers to easily image the 2D semiconductor and then pattern the electrodes where desired. Also, t-SPL fabrication systems promise significant initial savings as well as operational costs: They dramatically reduce power consumption by operating in ambient conditions, eliminating the need to produce high-energy electrons and to generate an ultra-high vacuum. Finally, this thermal fabrication method can be easily scaled up for industrial production by using parallel thermal probes.

Riedo expressed hope that t-SPL will take most fabrication out of scarce clean rooms — where researchers must compete for time with the expensive equipment — and into individual laboratories, where they might rapidly advance materials science and chip design. The precedent of 3D printers is an apt analogy: Someday these t-SPL tools with sub-10 nanometer resolution, running on standard 120-volt power in ambient conditions, could become similarly ubiquitous in research labs like hers.

Riedo’s work on thermal probes dates back more than a decade, first with IBM Research — Zurich and subsequently SwissLitho, founded by former IBM researchers. A process based on a SwissLitho system was developed and used for the current research. She began exploring thermal lithography for metal nanomanufacturing at the City University of New York (CUNY) Graduate Center Advanced Science Research Center (ASRC), working alongside co-first-authors of the paper, Xiaorui Zheng and Annalisa Calò, who are now post-doctoral researchers at NYU Tandon; and Edoardo Albisetti, who worked on the Riedo team with a Marie Curie Fellowship.

Materials provided by NYU Tandon School of Engineering. Note: Content may be edited for style and length.