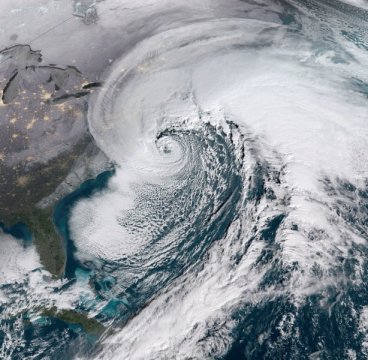 Even though climate change is expected to reduce the total amount of U.S. snowfall this century, it’s unlikely to significantly rein in the most powerful nor’easters that pummel the East Coast, new research indicates.

The study finds that smaller snowstorms that drop a few inches will diminish greatly in number by late century. But the most damaging types of storms along the Eastern Seaboard, which strike every few years or so and cause widespread disruption, will remain about as frequent in a warming world.

“What this research finds is almost all of the decrease in snow occurs in weaker, more nuisance-type events,” said atmospheric scientist Colin Zarzycki, the author of the study. “The really crippling storms that have major regional impacts on transportation, on the economy, on infrastructure are not significantly mitigated in a warming climate.”

“The big nor’easters are not just going to go away.”

Zarzycki conducted the research as a scientist at the National Center for Atmospheric Research. He is now a professor at Pennsylvania State University in the Department of Meteorology and Atmospheric Science.

The new study is part of a growing body of research into the complex ways that a warmer atmosphere will influence weather patterns and extreme weather events. Scientists have found that storms such as hurricanes and hailstorms are likely to become less frequent in the future — but pack an even more powerful punch in those instances when they’re especially intense.

The study was published in Geophysical Research Letters. It was primarily funded by the U.S. Department of Energy.

Previous scientific studies have indicated that total snowfall over the course of the winter is likely to decline in coming decades. The reason, for the most part, is straightforward: more precipitation will fall as rain because of the warming influence of greenhouse gases on the atmosphere.

Zarzycki wanted to take a closer look to see how warmer temperatures would affect individual nor’easters. These powerful storms can bring blizzard conditions and coastal flooding to densely populated areas, sometimes causing widespread disruption and economic damage stretching into the billions of dollars.

To do so, Zarzycki turned to an existing set of advanced computer simulations of climate conditions, which scientists had created using the NCAR-based Community Earth System Model. The simulations used projections of society continuing a “business-as-usual” approach to emitting greenhouse gases, which would lead to pronounced warming this century. The simulation data set also consists of multiple ensemble members, which are realizations of the same climate but with different weather patterns that reflect the natural variability of weather. This was crucial for Zarzycki to get statistics for very rare but crippling storms.

Zarzycki applied a specialized algorithm to the simulations to essentially cut out and count the number of snowstorms. This enabled him to effectively peer into future climate conditions and zero in on the impact on individual nor’easters.

The results show that moderate nor’easters, which currently occur every one to two years, will decline sharply over the next few decades and become almost twice as rare by late century. But the frequency of very powerful storms that occur about once a decade, or of the most extreme storms that strike a few times per century, will be largely unchanged.

The reasons have to do with a combination of factors that will occur in the future: a shorter snow season, the ability of the atmosphere to hold more water, the warming of ocean waters that fuel powerful storms, and the increased energy in the warmer atmosphere that can turbocharge storms when conditions are lined up. All of these can modify a storm’s impacts in different ways.

“We’ll have fewer storms overall in the future, but when the atmospheric conditions align they’ll still pack a wallop, with incredibly heavy snowfall rates,” Zarzycki said.

The research also accounts for population distribution, which can highlight regional societal impacts. For example, Zarzycki found that the trajectories of future storms will generally remain the same, meaning they are about as likely as present-day storms to bear down on heavily populated areas along the coastal corridor. That’s an important consideration, given that the path a snowstorm takes could lead to paralyzing one or more of the nation’s most economically important cities.

Zarzycki did not analyze how the mix between rain and snow may evolve in the future or what that might mean for flooding. But the paper recommends that local officials incorporate potential changes in powerful storms when planning new projects.

“Additional considerations are needed when developing hydrological infrastructure for water resources and flood resistance as the behavior of snowpack, snowmelt, and runoff tied to coastal storms [in the Northeast] are likely to change in the future,” the paper concludes.