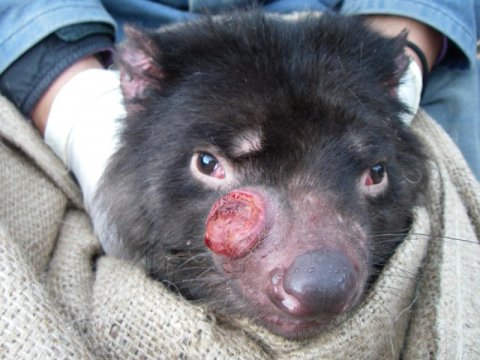 A new study of Tasmanian devils has revealed that a transmissible cancer which has devastated devil populations in recent years in unlikely to cause extinction of the iconic species.

New research led by Dr Konstans Wells from Swansea University has revealed that it is more likely that the disease will fade-out or that the devils will coexist with Tasmanian Devil Facial Tumour Disease (DFTD) in future.

DFTD typically kills the majority of devils it infects and has wiped out around 80% of wild devils with continuous decline of existing populations since the disease was first identified.

An international team of scientists from the UK, Australia and the USA matched field epidemiological evidence from wild populations collected over a 10-year period in north-west Tasmania with simulation studies, which revealed that DFTD is unlikely to continue causing ongoing population declines of Tasmanian devils in future.

They say the findings of their study, published in Ecology, offers much-needed hope that the species, which is the world’s largest remaining marsupial carnivore, will not necessarily become extinct due to DFTD.

First discovered in north-eastern Tasmania in 1996, DFTD causes tumours to form on the face and neck of the animal. The cancer spreads when the devils bite each other’s faces during fighting, thus killing the animals within six to twenty four months.

Dr Konstans Wells, lead author of the study, said: “Our findings suggest that immediate management interventions are unlikely to be necessary to ensure the survival of Tasmanian devil populations. This is because strong population declines of devils after disease emergence do not necessarily translate into long-term population declines.”

Co-author of the study, Dr Rodrigo Hamede from the University of Tasmania, said: “With growing evidence that devils are showing signs of adaptation to DFTD and that so far the disease has not caused local extinctions, management actions targeted at understanding the devil’s adaptive strategies to cope with DFTD should be considered.

“Complete eradication of DFTD is not feasible, therefore studying the long-term interactions between devils and tumours will provide a realistic prognosis for the species and at the same time will help us to understand important evolutionary processes. This is particularly relevant given the recent outbreak of a new transmissible cancer — devil facial tumour 2 — affecting devil populations in south-eastern Tasmania. Devils seem to be prone to transmissible cancers, so studying epidemic dynamics and evolutionary responses to this type of diseases should be a priority.”

The research suggests that management efforts to maintain devil populations should be guided by the changing understanding of the long-term outcome of the disease impact on devils.

Dr Wells explained: “Management efforts in wild populations that solely aim to combat the impact of DFTD can be counterproductive if they disrupt long-term forces at work that may eventually lead to stable devil populations that are well able to persist with the cancer.

“Wildlife diseases such as DFTD should not disguise the fact that sufficiently large and undisturbed natural environments are a vital prerequisite for wildlife to persist and eventually cope with obstructions such as infectious diseases without human intervention.”