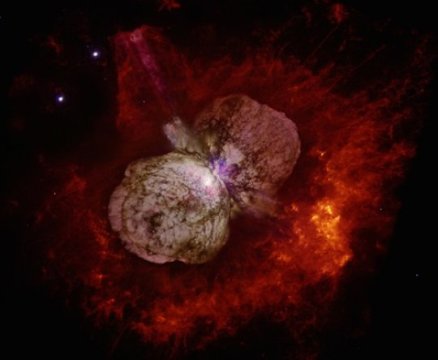 Imagine traveling to the Moon in just 20 seconds! That’s how fast material from a 170 year old stellar eruption sped away from the unstable, eruptive, and extremely massive star Eta Carinae.

Astronomers conclude that this is the fastest jettisoned gas ever measured from a stellar outburst that didn’t result in the complete annihilation of the star.

The blast, from the most luminous star known in our galaxy, released almost as much energy as a typical supernova explosion that would have left behind a stellar corpse. However, in this case a double-star system remained and played a critical role in the circumstances that led to the colossal blast.

Over the past seven years a team of astronomers led by Nathan Smith, of the University of Arizona, and Armin Rest, of the Space Telescope Science Institute, determined the extent of this extreme stellar blast by observing light echoes from Eta Carinae and its surroundings.

Light echos occur when the light from bright, short-lived events are reflected off of clouds of dust, which act like distant mirrors redirecting light in our direction. Like an audio echo, the arriving signal of the reflected light has a time delay after the original event due to the finite speed of light. In the case of Eta Carinae, the bright event was a major eruption of the star that expelled a huge amount of mass back in the mid-1800s during what is known as the “Great Eruption.” The delayed signal of these light echoes allowed astronomers to decode the light from the eruption with modern astronomical telescopes and instruments, even though the original eruption was seen from Earth back in the mid-19th century. That was a time before modern tools like the astronomical spectrograph were invented.

“A light echo is the next best thing to time travel,” Smith said. “That’s why light echoes are so beautiful. They give us a chance to unravel the mysteries of a rare stellar eruption that was witnessed 170 years ago, but using our modern telescopes and cameras. We can also compare that information about the event itself with the 170-year old remnant nebula that was ejected. This was a behemoth stellar explosion from a very rare monster star, the likes of which has not happened since in our Milky Way Galaxy.”

The Great Eruption temporarily promoted Eta Carinae to the second brightest star visible in our nighttime sky, vasty outshining the energy output every other star in the Milky Way, after which the star faded from naked eye visibility. The outburst expelled material (about 10 times more than the mass of our Sun) that also formed the bright glowing gas cloud known as the Homunculus. This dumbbell-shaped remnant is visible surrounding the star from within a vast star-forming region. The eruptive remnant can even be seen in small amateur telescopes from the Earth’s Southern Hemisphere and equatorial regions, but is best seen in images obtained with the Hubble Space Telescope.

The team used instruments on the 8-meter Gemini South telescope, Cerro Tololo Inter-American Observatory 4-meter Blanco telescope, and the Magellan Telescope at Las Campanas Observatory to decode the light from these light echoes and to understand the expansion speeds in the historical explosion. “Gemini spectroscopy helped pin down the unprecedented velocities we observed in this gas, which clocked in at between about 10,000 to 20,000 kilometers per second,” according to Rest. The research team, Gemini Observatory, and Blanco telescope are all supported by the U.S. National Science Foundation (NSF).

“We see these really high velocities all the time in supernova explosions where the star is obliterated.” Smith notes. However, in this case the star survived, and explaining that led the researchers into new territory. “Something must have dumped a lot of energy into the star in a short amount of time,” said Smith. The material expelled by Eta Carinae is travelling up to 20 times faster than expected for typical winds from a massive star so, according to Smith and his collaborators, enlisting the help of two partner stars might explain the extreme outflow.

The researchers suggest that the most straightforward way to simultaneously explain a wide range of observed facts surrounding the eruption and the remnant star system seen today is with an interaction of three stars, including a dramatic event where two of the three stars merged into one monster star. If that’s the case, then the present-day binary system must have started out as triple system, with one of those two stars being the one that swallowed its sibling.

“Understanding the dynamics and environment around the largest stars in our galaxy is one of the most difficult areas of astronomy,” said Richard Green, Director of the Division of Astronomical Sciences at NSF, the major funding agency for Gemini. “Very massive stars live short lives compared to stars like our Sun, but nevertheless catching one in the act of a major evolutionary step is statistically unlikely. That’s why a case like Eta Carinae is so critical, and why NSF supports this kind of research.”

Chris Smith, Head of Mission at the AURA Observatory in Chile and also part of the research team adds a historical perspective. “I’m thrilled that we can see light echoes coming from an event that John Herschel observed in the middle of the 19th century from South Africa,” he said. “Now, over 150 years later we can look back in time, thanks to these light echoes, and unveil the secrets of this supernova wannabe using the modern instrumentation on Gemini to analyze the light in ways Hershel couldn’t have even imagined!”

Eta Carinae is an unstable type of star known as a Luminous Blue Variable (LBV), located about 7,500 light years from Earth in a young star forming nebula found in the southern constellation of Carinae. The star is one of the intrinsically brightest in our galaxy and shines some five million times brighter than our Sun with a mass about one hundred times greater. Stars like Eta Carinae have the greatest mass-loss rates prior to undergoing supernova explosions, but the amount of mass expelled in Eta Carinae’s 19th century Great Eruption exceeds any others known.

Eta Carinae will probably undergo a true supernova explosion sometime within the next half-million years at most, but possibly much sooner. Some types of supernovae have been seen to experience eruptive blasts like that of Eta Carinae in only the few years or decades before their final explosion, so some astronomers speculate that Eta Carinae might blow sooner rather than later.

The Gemini Observations utilized the Gemini Multi-Object Spectrograph on the Gemini South telescope in Chile and used a powerful technique called Nod and Shuffle that enables greatly improved spectroscopic measurements of extremely faint sources by reducing the contaminating effects of the night sky. The new results are presented in two papers accepted for publication in the Monthly Notices of the Royal Astronomical Society.