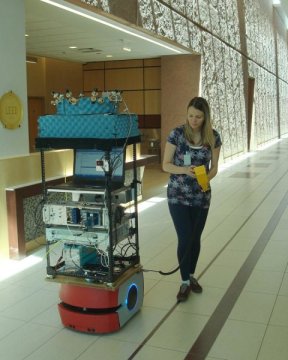 Researchers at the National Institute of Standards and Technology (NIST) have developed a method for evaluating and selecting optimal antenna designs for future fifth-generation (5G) cellphones, other wireless devices and base stations.

5G systems will avoid crowded conventional wireless channels by using higher, millimeter-wave frequency bands. Transmissions at these frequencies lose a lot of energy along the way, which weakens received signal strength. One solution is “smart” antennas that can form unusually narrow beams — the area in space where signals are transmitted or received — and rapidly steer them in different directions.

“Our new method could reduce costs by enabling greater success with initial network design, eliminating much of the trial and error that is now required,” NIST engineer Kate Remley said. “The method also would foster the use of new base stations that transmit to several users either simultaneously or in rapid succession without one antenna beam interfering with another. This, in turn, would increase network capacity and reduce costs with higher reliability.”

This is the first detailed measurement-based study of how antenna beamwidth and orientation interact with the environment to affect millimeter-wave signal transmission. In the technique, NIST measurements covering a broad range of antenna beam angles are converted into an omnidirectional antenna pattern covering all angles equally. The omnidirectional pattern can then be segmented into narrower and narrower beamwidths. Users can evaluate and model how antenna beam characteristics are expected to perform in specific types of wireless channels.

An engineer could use the method to select an antenna that best suits a specific application. For example, the engineer may choose a beamwidth that is narrow enough to avoid reflections off certain surfaces or that allows multiple antennas to coexist in a given environment without interference.

To develop the new method, the NIST team collected experimental data in a hallway and lobby of a NIST research building, using a special robot loaded with a customized channel sounder and other equipment. A channel sounder collects data that capture the signal reflections, diffractions and scattering that occur between a transmitter and receiver. Many such measurements can be used to create a statistical representation of the radio channel, to support reliable system design and standardization.

NIST study results confirm that narrow beams can significantly reduce signal interference and delays, and that an optimized beam orientation reduces energy loss during transmissions. For example, the time interval during which signal reflections arrive (a metric called RMS delay spread) dropped dramatically from 15 nanoseconds (ns) to about 1.4 ns as antenna beamwidth was reduced from omnidirectional (360 degrees) to a narrow 3 degrees or so-called pencil beam.

Future research will include extending the method to different environments and analysis of other wireless channel characteristics.