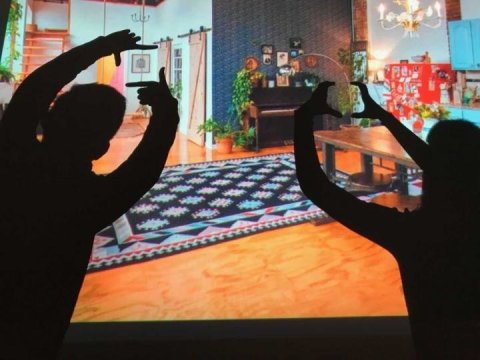 People around the world paint their walls different colors, buy plants to spruce up their interiors and engage in a variety of other beautifying techniques to personalize their homes, which inspired a team of researchers to study about 50,000 living rooms across the globe.

In a study that used artificial intelligence to analyze design elements, such as artwork and wall colors, in pictures of living rooms posted to Airbnb, a popular home rental website, the researchers found that people tended to follow cultural trends when they decorated their interiors. In the United States, where the researchers had economic data from the U.S. Census, they also found that people across socioeconomic lines put similar efforts into interior decoration.

“We were interested in seeing how other cultures decorated,” said Clio Andris, assistant professor of geography, Penn State and an Institute for CyberScience associate. “We see maps of the world and wonder, ‘What’s it like living there,’ but we don’t really know what it’s like to be in people’s living rooms and in their houses. This was like people around the world inviting us into their homes.”

The team examined living room décor in 107 cities on six continents and in neighborhoods across six U.S. cities.

Certain regions seemed to have similar taste in interior design, said Xi Liu, doctoral student in geography, Penn State and lead author of the study. In some cases, the way those cultures decorated their living rooms matched the researchers’ expectations, he added.

“There were a lot of vibrant colors in India and Morocco, for example,” said Liu. “And, of course, that wasn’t a big surprise — we had an idea that this might be the case before we started the study, but we weren’t sure whether that would be true or not.”

In Europe, North America and South America, people tended to display more books, according to the researchers. Living rooms in Europe, especially Italy, featured a lot of wall art, which matched their expectations.

However, the researchers, who published their findings in the current issue of EPJ Data Science, were surprised when some cultures bucked the way their living spaces are commonly portrayed on travel television shows and in travel brochures.

“We thought it was interesting that we found a lot of indoor plants in cold areas, especially in Scandinavia,” said Andris. “We originally thought that there would be more indoor plants in warm areas because they would be inexpensive things to have there, but that wasn’t the case. We were also surprised that a lot of the island cultures were a little more austere than we had initially thought. They didn’t use as bright of colors. Interiors in places, like Fiji and the Caribbean, for example, were very clean-looking.”

In the United States, the researchers did not find a significant difference in the presence of decorative elements across neighborhoods with varying incomes, unemployment rates, educational attainment, residential property value and racial diversity. They suggest this indicates that Americans take similar efforts in personalizing their homes.

Because the task of going through a million images to note multiple decorative elements would be too time-consuming for the researchers, the team used deep learning, a type of artificial intelligence, to detect decorative items, such as wall art, plants, books and paint colors, in the pictures. Human trainers initially picked out decorative elements in pictures to program the computer to recognize the decorations, then the computer could pick out and classify these features on its own.

“The term for this is transfer learning, but it’s a two-step process,” said Liu. “The first step is to classify the images into categories, such as living rooms, kitchens, bedrooms, and also outdoor space. Then, we use object detection. The program will draw boxes around objects in the rooms, like wall art and books, and then the program counts how many of those objects we have in each image.”

The researchers analyzed only living rooms in homes because these rooms most likely represent the property owners’ tastes and not just how they market their homes on the rental website.

The researchers used an application program interface — or API — that allowed them to access large amounts of publicly available data, including images, on Airbnb. They collected about a million geolocated images of interior spaces from the site.

Andris said that the study is also unique because it may represent new ways for machine learning techniques to study cultural phenomena.

In the future, the researchers might look at other online photo hubs, such as Craigslist, to better target natural decorative tastes. They may also train the computer program to detect styles of artwork, or other meaningful objects, such as flags, pictures of world leaders or historical emblems.