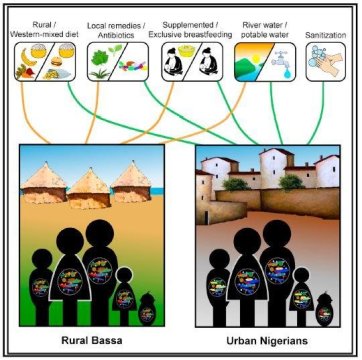 An analysis comparing the intestinal microbiomes of both infants and adults living in rural and urban areas of Nigeria has revealed that not only are there many differences in adults living in subsistence environments versus urban ones but also that these variations begin at a very young age. The study appears June 5 in the journal Cell Reports.

“We’ve always assumed that the microbiomes of infants were the same everywhere, and that differences came later in life,” says senior author Silvia Turroni of the Department of Pharmacy and Biotechnology at the University of Bologna in Italy. “We were surprised to find that the microbiomes of infants living in rural areas were missing components that we have long believed were standard to all infant populations — especially that they were essentially devoid of Bifidobacterium.” Bifidobacterium dominates the microbiomes of Western infants and has been considered a key element to healthy growth and development.

Previous studies that have analyzed the microbiomes of rural, hunter-gatherer societies have generally compared them to distant urban populations in Europe or the United States. This study was unique in that it looked at rural and urban African people in the same geographic area. Urban populations in the study were drawn from four state capital cities in Nigeria and the national capital, Abuja.

“This research was specifically designed to fill in gaps of knowledge about the variation of the human gut microbiome, as well as the metabolome, in relation to subsistence patterns in geographically close populations,” says first author Funmilola Ayeni of the Department of Pharmaceutical Microbiology at the University of Ibadan in Nigeria.

This study was also unique because it looked at both infant and adult microbiomes. For the purposes of this study, infants were defined as children up to age three. Unexpectedly, the investigators found that infants living in rural areas had microbiome profiles that were overall more diverse and more like those of adults.

The rural people included in the study, an agricultural society called the Bassa, consume a diet consisting of tubers, grains, and leafy soups, as well as untreated water. The urban diet contained processed foods and treated water but had more elements of a traditional Nigerian diet than what is seen in Western countries. Rural infants were given foods other than breast milk at a younger age than urban infants were.

Although it is only one factor, diet is an important component affecting the makeup of the intestinal microbiota. The researchers found that the rural population had a higher level of certain bacterial species that are important for digesting fiber. In addition, when metabolites in the samples were analyzed, rural populations had lower levels of amino acids and biogenic amines, suggesting a lower consumption of protein.

There were some drawbacks to the study. For one, the Bassa people usually don’t know their exact ages. Also, data about gender were not collected for the Bassa who participated, so the researchers were not able to look at whether there were differences between the sexes.

Still, the findings were notable. “Studies like these have profound evolutionary relevance because they recall ways of life that have characterized human history, from the hunting and gathering of our Paleolithic ancestors to small-scale agriculture, to the postindustrial Western lifestyle,” Turroni says.

“The distinctive microbial and metabolic traits observed in traditional populations, which tend to have much lower rates of Western diseases, could help us understand the mechanisms that lead to the rupture of these microbiome-host relationships,” Ayeni adds. “This could also potentially result in a greater understanding of the inflammation and immune dysregulation that follows.”