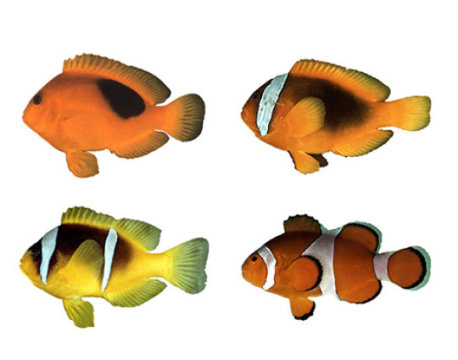 Coral reef fish are known for the wide range of colors and patterns they display, but the mechanisms governing the acquisition of these characteristics are still poorly understood. These researchers focused on clown fish, a group including thirty-some species distinguished by numbers of white stripes (zero to three) and by their colors, including yellow, orange, red, and black.

The team first demonstrated that stripes are essential for individual fish to recognize others of their species. Such recognition is critical to the social organization of clown fish living among sea anemones where several species may be simultaneously present and young fish seek to establish permanent homes.

The researchers then deciphered the sequences of stripe appearance and disappearance during the life of a clown fish. Stripes appear one at a time, starting near the head and progressing towards the tail, during the transition from the larval to the juvenile stage. The team further observed that some stripes are occasionally lost between the juvenile and adult stages, this time beginning at the tail end.

In an attempt to understand the origin of these patterns, the scientists delved into the evolutionary history of clown fish. They discovered that their common ancestor sported three stripes. Just like today’s clown fish, these ancestral stripes were made up of pigmented cells called iridophores containing reflective crystals. Over the course of evolutionary history, some species of clown fish gradually lost stripes, resulting in today’s range of color patterns.

The research team would like to follow up by identifying the genes that control the acquisition of white stripes for a greater understanding of how they evolved. This should clue them in to the processes behind color diversification and the role color plays in the social organization of reef fish.