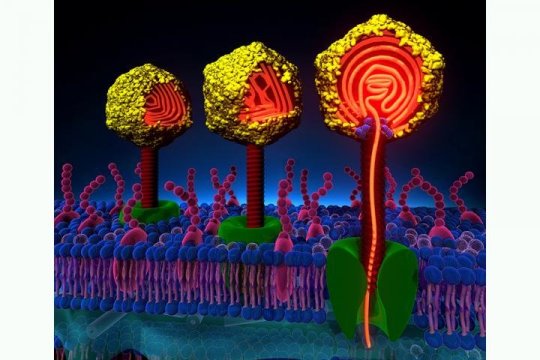 A new study reveals a previously unknown mechanism that governs whether viruses that infect bacteria will quickly kill their hosts or remain latent inside the cell. The discovery, reported in the journal eLife, also may apply to viruses that infect humans and other animals, the researcher said.

“I found for the first time that the mechanics of how DNA is packaged inside a virus determine the course of infection,” said University of Illinois pathobiology professor Alex Evilevitch, who conducted the study.

After injecting their DNA into a cell, viruses tend to follow one of two major pathways, called “lytic” or “latent” infections. In the lytic pathway, viral DNA quickly commandeers the host cell’s own resources to make hundreds of copies of itself. The new viruses then kill the cell and go on to repeat the cycle in other cells.

Latent viral infections follow a different course, however: Once inside the cell, the viral DNA incorporates itself into the host genome. When the cell divides, the viral DNA also gets duplicated. As long as the infection remains latent, there is little evidence of it in the host.

The problem with latent viral infections is that, in times of stress for the host, the virus can suddenly turn lytic, taking over the cell and killing it after a mad bout of reproduction, Evilevitch said.

“The many viral infections that we carry can remain latent for a very long time. Sometimes they go lytic, and that’s when we develop symptoms,” he said.

“It’s very important to know what regulates the switch from the latent state to the lytic state, so that we can perhaps stop these infections from spreading,” Evilevitch said.

Many studies of the dynamics of viral infection have focused on the structural characteristics of the protein capsids that protect the viral genetic material and shuttle it to the site of infection. Evilevitch looked instead at the stresses and strains on the viral DNA molecules just before they are injected into a host.

He used isothermal titration calorimetry, which can measure discrete changes in thermal energy in a system, to track the course of infection. In a previous study, his laboratory group discovered that the process of viral infection gives off heat. In the new study, Evilevitch exposed the host bacterium, Escherichia coli, to thousands of viral particles, then monitored the thermal ups and downs that occurred as infection progressed.

He found that the infections occurred either synchronously — with hundreds of viruses injecting their DNA into the bacterium at once — or randomly, with infections occurring more slowly in an uncoordinated fashion. A closer look at the viral genetic material prior to infection revealed that the DNA packaged inside the virus tended to be more “liquid-like” in the synchronous infections but stiffer during the random infections.

The synchronous infections corresponded closely with latent infections that preserved the host, while the slower, more random process of infection led to lytic events that killed the host.

“The DNA becomes more flexible; it has more of a fluid character,” he said. “As a result, it’s more likely to be ejected — like toothpaste out of a tube. But if it’s solid, it’s going to get stuck inside the tube.”

The new findings are “good for virology,” Evilevitch said.

“We now understand that the mechanics of DNA packaged inside the virus directly influences the direction of infection toward a lytic or latent pathway,” he said. “We think this will help us learn how to control infections and prevent them from becoming lytic. It can potentially lead to new therapies to prevent the spread of infection.”