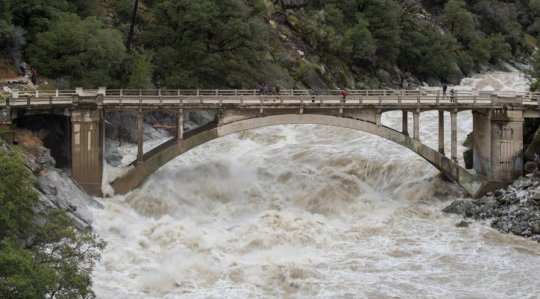 So here’s the good news: Despite fears to the contrary, California isn’t facing a year-round drought in our warming new world.

However, UC Riverside Earth Sciences Professor Robert Allen’s research indicates that what precipitation the state does get will be pretty much limited to the winter months — think deluge-type rainfall rather than snow — and non-winter months will be even dryer than usual, with little or no rain at all.

“It is good news,” Allen said. “But only relative to the alternative of no rain at all.”

Allen’s latest findings build on his 2017 research that concluded global warming will bring increased winter precipitation to California through the end of this century.

The findings are outlined in a paper by Allen and his co-author Ray Anderson, research soil scientist at the USDA-ARS US Salinity Lab, titled “21st century California drought risk linked to model fidelity of the El Niño teleconnection.” It was published September 3 in Climate and Atmospheric Science.

The paper focuses on how “greenhouse-gas-induced climate change” will affect drought conditions in the state. The findings are based on 40 climate models that were compared to actual precipitation, soil moisture, and streamflow in the state between 1950 and 2000.

Historically, about 90 percent of California’s rain and snow have come during the winter months of December, January, and February, Allen said, with sporadic rain scattered over the rest of the year. But now, warming surface temperatures in the tropical Pacific Ocean are expected to amplify the rainy season by sending stormy El Niño conditions over the state in the winter.

Bottom line, Allen said, the flooding and mudslides that accompanied the heavy winter rains of 2017 shouldn’t be considered an aberration, but potentially California’s new weather norm.

The trick will be finding a way to capture excess water for dry periods, he said. “It’s all about smoothing the seasonable differences. If we can take advantage of the enhanced winter rainfall, we can hopefully get through the drying trends the rest of the year.”

Trapping that winter precipitation will be a challenge, however, especially since it’s likely to come more in the form of rain than snow due to the warming climate. Historically, snow in the mountains feeds reservoirs and provides water to agriculture when it is needed in the summer, but rain will just run off unless it is captured.

Allen’s findings also bode ill for California’s fire season. The state’s new norm could mimic — or surpass — the fire season of 2017, the worst in California’s history, as wet winters encourage lush spring growth that will quickly parch during the hot and dry season, becoming wildfire fuel.

In fact, Allen said, these “new norm” projections aren’t for a distant future.

“I think it’s here now, so we need to start acting as quickly as possible,” he said. “Adaptation is incredibly important in response to climate change, and in this case it means enhancing our water storage capabilities, our reservoirs and dam structures, because things are going to become drier in the nonwinter months.”

And for ordinary citizens? This might be a great time to start investing in rain barrels.

“In Southern California, it could mean having native plants in your yard because a grass yard has to be irrigated, and that’s probably not the wisest use of water,” he said. “It’s all about living sustainably.”