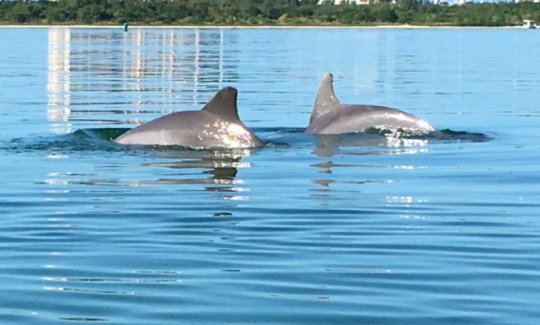 For the first time, researchers have explored the physiological adaptations that enable different populations of the same species of dolphin to vary in diving ability by almost 1000m. The research, published in two complementary studies in Frontiers in Physiology, compared the lung mechanics and metabolic rates of bottlenose dolphin populations known for their different hunting depths. Using theoretical estimates of gas management, the results support a new hypothesis that lung architecture and the management of blood flow allow the dolphins to access oxygen in the lungs while preventing uptake of nitrogen, thereby avoiding decompression sickness.

Bottlenose dolphin populations are often found close to land in shallow coastal environments, making short, shallow dives of less than 10m for their prey. However, some populations — such as the Bermudian population in this study — frequently dive to depths of up to 400m, and as deep as 1000m on occasion, spending up to 13 minutes underwater in search of food on a single breath.

“How can a single species have such extremely different life styles?” This question motivated Dr Andreas Fahlman of the Fundación Oceanográfic in Valencia, Spain, who led both studies with his international team. “We wanted to measure what kind of differences are responsible for these huge variations. This allows us to determine how far the physiology can change within a single species and understand the threat that stressors may have on these deep diving dolphins.”

Anyone who has previously scuba-dived will know about decompression sickness, commonly known as ‘the bends’. This painful and potentially life-threatening condition is caused from surfacing too quickly at the end of a dive. The rapid expansion of nitrogen bubbles — which form in the bloodstream and tissues during the dive — are not given enough time to diffuse from the body naturally during the ascent.

Dolphins run the same risks when diving to great depths. The team measured the physiology of the lungs and energy consumption of several bottlenose dolphins known to make deep dives to understand how these problems are avoided.

In the first study, the authors compared their results with existing data on a short, shallow diving population of bottlenose dolphins in Florida. The deep diving dolphins had greater oxygen storage capacity, which would enable them to dive for longer durations. However, the authors found no differences in the lung mechanics or metabolic rates between the shallow and deep diving populations.

“This was unexpected, as past studies have suggested that compression of the lungs was the main adaptation to avoid taking up excessive nitrogen at depth and getting the bends,” says Fahlman. “The lack of differences in the lungs between the shallow and deep divers suggest that the dolphins may use other means to avoid diving related problems.”

This led the researchers to their second study, where they estimated how different populations may manage gas exchange during shallow and deep diving lifestyles. They constructed theoretical models using known species-specific parameters to determine what adaptations the deep diving dolphins would need to reach these depths without suffering negative health implications. The model suggested that, when comparing known parameters with how much oxygen storage would be required, the deep diving dolphins would exceed their calculated dive limits.

“The results indicated that the deep diving population would need to keep an elevated heart rate, not only during surface intervals, but also during shallow dives in-between deep dives to allow sufficient restoration of oxygen stores,” says Fahlman. “Keeping the blood flow elevated between deep foraging dives helps reduce time spent at the surface and enhances recovery time. On the other hand, during deep dives, the dolphins would need to direct blood flow through collapsed regions of the lung, allowing some exchange of oxygen and carbon, while preventing the exchange of nitrogen. Thus, the dolphins may have a way to manage the level of nitrogen they absorb and thereby preventing the bends.”

“This hypothesis provides new and exciting research opportunities to understand how mammals can dive to extreme breaths on a lung full of air without any of the related problems that humans experience,” says Fahlman. “However, our dataset is limited, and further studies should be done on other deep diving dolphin populations to determine if there are similar physiological requirements for deep diving.”

The results presented in these publications may provide vital information to better understand the risks associated with diving in marine mammals and the impact humans may have on their survival as a species.

Environmental changes may alter prey distribution and availability, causing the dolphins to search beyond their normal depth ranges for prey. Additionally, human-made stresses such as increasing ocean noise, sonar exposure or capture in fishing nets may cause disturbance to normal diving conditions. This could affect the physiological adaptations dolphins use to ensure safe surfacing after deep dives, increasing the risk of diving related problems such as decompression sickness.

“If we are able to better understand how our impact may affect these species, we may eventually be able to improve conservation efforts for these dolphins, and all marine mammals,” hopes Fahlman.

Materials provided by Frontiers. Note: Content may be edited for style and length.