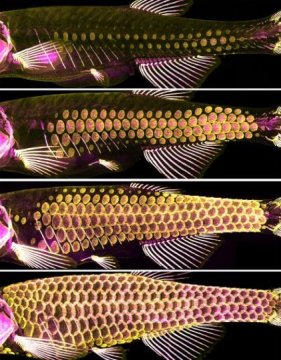 When sea creatures first began crawling and slithering onto land about 385 million years ago, they carried with them their body armor: scales. Fossil evidence shows that the earliest land animals retained scales as a protective feature as they evolved to flourish on terra firma.

But as time passed, and species diversified, animals began to shed the heavy scales from their ocean heritage and replace them with fur, hair and feathers.

Today the molecular mechanisms of scale development in fish remain remarkably similar to the mechanisms that also produce feathers on birds, fur on dogs and hair on humans — suggesting a common evolutionary origin for countless vastly different skin appendages.

A new study, scheduled for online publication Tuesday in the journal eLife, examines the process as it occurs in a common laboratory genetics model, the zebrafish.

“We’ve found that the molecular pathways that underlie development of scales, hairs and feathers are strikingly similar,” said the study’s lead author, Andrew Aman, a postdoctoral researcher in biology at the University of Virginia.

Aman and his co-authors, including UVA undergraduate researcher Alexis Fulbright, now a Ph.D. candidate at the University of Utah, used molecular tools to manipulate and visualize scale development in zebrafish and tease out the details of how it works. It turns out, as the researchers suspected, skin appendages seen today originated hundreds of millions of years ago in primitive vertebrate ancestors, prior to the origin of limbs, jaws, teeth or even the internal skeleton.

While zebrafish have been studied for decades in wide-ranging genetic experiments, their scale development has mostly been overlooked, according to Aman.

“Zebrafish skin, including the bony scales, is largely transparent and researchers probably have simply looked past the scales to the internal structures,” he said. “This is an area ripe for investigation, so we got the idea to look at the molecular machinery that drives the development of patterning in surface plating. We discovered profound similarities in the development of all skin appendages, whether scales, hair, fur or feathers.”

Aman works in the lab of David Parichy, the study’s senior author and the Pratt-Ivy Foundation Distinguished Professor of Morphogenesis in UVA’s Department of Biology. Parichy’s lab investigates developmental genetics of adult morphology, stem cell biology and evolution, using zebrafish and related species as models. A high percentage of the genes in these common aquarium fish are the same as in humans — reflecting a common ancestry going back to the earliest common vertebrates that populated the ancient seas.

Developmental patterning — such as how scales take shape and form in slightly overlapping layers (in the case of zebrafish, there are more than 200 round scales on each side of the fish) — is a critical part of all development, including how stem cells differentiate and become, for example, bone cells, skin cells and any of the hundreds of kinds of cells that comprise the 37 trillion or so cells in the human body.

How cells differentiate and organize into precise shapes (and sometimes develop into misshapen forms that can result in congenital diseases, cancers and other abnormalities) is of utmost interest to developmental biologists like Parichy and Aman. Understanding the process provides insights into birth defects, cancer and genetic disease, and how the process might be fixed when gone awry.

“This research helps us make important links between the natural history of life on Earth, the evolutionary process and human disease,” Aman said.