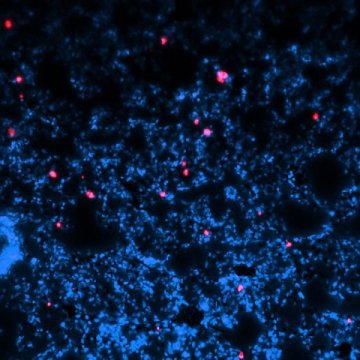 A new delivery system for bacteriophages — viruses that selectively attack harmful bacteria — could help give doctors a new way to battle lung infections that threaten older patients and people with cystic fibrosis.

Phage therapy is a promising alternative to antibiotics because it attacks specific pathogens, does not harm the body’s normal contingent of bacteria and won’t contribute to multi-drug resistance. However, therapeutic bacteriophages can be difficult to purify and challenging to deliver to the site of an infection, especially when that location is the lungs.

A research team headed by the Georgia Institute of Technology has demonstrated a new delivery technique that uses dry, porous microparticles coated with phages. In animal testing, the phage-coated polymer particles successfully treated pneumonia in infected mice and dramatically reduced bacterial levels in an animal model of cystic fibrosis. The technique might one day allow delivery of the dry-powder phage using a device similar to a common inhaler.

“Phage delivery is an area where the right type of material could make a difference in therapeutic applications,” said Andrés García, the Rae S. and Frank H. Neely Chair and Regents’ Professor in Georgia Tech’s George W. Woodruff School of Mechanical Engineering. “We set out to engineer a biomaterial carrier that would keep the phage active while delivering them deep into the lungs in a uniform fashion. This is a key step in moving this potential therapy forward.”

Phage therapy has generated more interest as concerns about antibiotic use has grown. Specific bacteriophages can target bacteria such as Pseudomonas aeruginosa — which causes some forms of pneumonia and is the major pathogenic bacteria in cystic fibrosis — without affecting other bacteria. Phage activity propagates beyond the coated particles, but is limited by the host population, so once the targeted bacteria are eliminated, the phage disappear.

Researchers have previously used a nebulizer to deliver wet phage mixtures to the lungs, but that approach is inefficient and inconvenient for patients. As an alternative, García and his collaborators developed a microparticle carrier made from the same polymer material used in dissolving sutures. They made the porous particles large enough to avoid rapid clearance by the body, but light enough to be delivered deep into the lungs.

The phage are incubated on the particles, then dried. When introduced into animal lungs as a puff of dry powder, the phage begin attacking the bacteria. For mice infected with pneumonia, the phage carried on the particles cleared the infection — while untreated mice died. A significant reduction in bacterial populations was observed in transgenic mice whose lungs simulated conditions typical of cystic fibrosis.

“When we immobilized the phage on the particles, we could retain good activity for days — as long as two weeks at room temperature,” García said. “We could store these particles, and when we delivered them to mice, get good distribution through the lungs. We believe the particles help stabilize the phage and improve the distribution in the lungs.”

Nael McCarty, Marcus Professor of Cystic Fibrosis and director of the Emory+Children’s Cystic Fibrosis Center of Excellence at Emory University and Children’s Healthcare of Atlanta, and one of the study’s co-authors, said the development of the delivery technique potentially advances the use of phage in treatment of cystic fibrosis.

“Cystic fibrosis is a common, life-limiting genetic disorder that affects many organ systems, but the most important impact on human health is chronic infections of the lung. Bacterial pneumonia that is resistant to multiple drugs is a challenge we must deal with frequently with cystic fibrosis,” he said. “Treatment with antibiotics often makes space for other opportunistic bacteria to take hold. Phage therapy could complement existing therapies without worsening antibiotic resistance. The technique developed and tested through this important collaboration could address one of the major challenges we have with phage therapy, which is delivery.”

The phage-coated microparticles were more effective at clearing bacteria than dried phage particles by themselves. The polymer material is biodegradable and was cleared from the animals within a few days. The technique was successful in attacking different strains of bacteria within biofilms, and the researchers did not see evidence that the bacteria were developing resistance.

Though the phage aren’t believed to attack mammalian cells, they can create an immune system response, and produce a toxins that can be harmful. They are grown in cultures containing the bacteria they attack, so separating them at the purity levels required is another challenge.

Among the next steps are to test the particle-delivery technique in larger animals and against mixtures of bacteria, which often infect humans. The technique must also be tested against chronic infections, which often are seen in persons with cystic fibrosis.