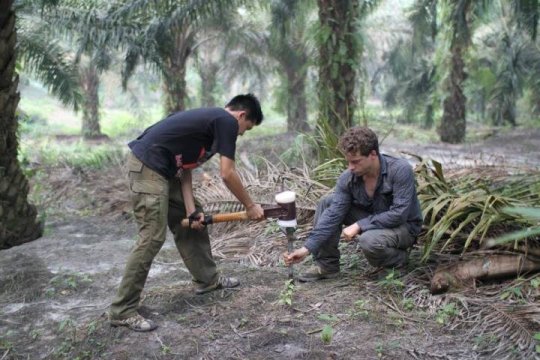 Indonesia and Malaysia together account for nearly 85% of global palm oil production. This oil is commonly used in processed foods, cosmetics and biofuels, and while it is inexpensive, the environmental and social costs are high. Each year, thousands of hectares of rainforest disappear in order to meet the growing demand for the oil worldwide. In 2012, Indonesia had the highest deforestation rate in the world, according to a study published in 2014 in Nature Climate Change.

Thomas Guillaume, a postdoctoral researcher at EPFL’s Ecological Systems Laboratory (ECOS) and the Swiss Federal Institute for Forest, Snow and Landscape Research (WSL), is the lead author of a synthesis study on the environmental impact of oil palm cultivation in Indonesia. The article, which was published on 19 June in Nature Communications, analyzed the carbon costs and benefits of converting rainforests into oil palm plantations. Drawing on more than two years’ worth of data collected by the University of Göttingen on the soil and vegetation in central Sumatra, the researcher compared the impact of oil palm monoculture with that of intensive and extensive rubber cultivation practices.

Converting rainforest land into oil palm plantations leads to the most important carbon emissions: one hectare of converted land equates to a loss of 174 tons of carbon, and most of this carbon will find its way into the air as CO2. “The quantity of carbon released when just one hectare of forest is cleared to grow oil palms is roughly equivalent to the amount of carbon produced by 530 people flying from Geneva to New York in economy class,” says the researcher.

Higher than the IPCC’s figure

This loss estimate is higher than the figure published by the Intergovernmental Panel on Climate Change (IPCC) to quantify the amount of greenhouse gases emitted by oil palm farming; it is also higher than the figure used by sustainable palm oil certification bodies. The study also shows that carbon loss in the soil must not be overlooked as it is currently happening with the present methodologies when plantations are established on non-peatland.

Intensive rubber farming, on the other hand, is associated with a loss of 159 tons of carbon, while extensive rubber production corresponds to 116 tons. This difference between oil palms and rubber plants owes largely to the shorter plantation rotation time of oil palms. However, oil palm farming is more efficient than intensive and extensive rubber farming in terms of the number of tons of biomass produced annually versus the resulting loss of carbon. In other words, more can be produced on a smaller area of land.

But this positive finding should not obscure the downsides. Following the harvest, the amount of biomass that returns to the soil to feed living organisms in the ground can be 90% lower than in a rainforest. This is because almost no natural “litter” — dead leaves and wood — goes back into the ground, as the soil on oil palm plantations is constantly being cleared and treated with pesticides to make the farmers’ work easier. As a result, large amounts of fertilizers are needed to make up for the loss of fertility in the soil and the decrease in its biological activity. “The quantity of biomass that humans take away in order to produce palm oil compared to the quantity left for the ecosystem sheds real doubt on the sustainability of this form of farming,” says Guillaume, who also compared microorganism activity in cultivated fields and in the rainforest.

This study also offers some practical advice on reducing the short-term environmental impact of both rubber tree and oil palm monocultures. For one, deforestation should be done only if the wood that is felled can then be used — such as for construction purposes — without being burned. In addition, a more abundant layer of vegetation should be left on the ground as a natural fertilizer. Finally, the waste from palm oil mills should be returned to the soil as another form of fertilizer.

For a longer-term approach, Guillaume points to the OPAL project (Oil Palm Adaptive Landscapes), which is being funded by the Swiss National Science Foundation and the Swiss Agency for Development and Cooperation. The group led by Professor Alexandre Buttler, the director of EPFL’s ECOS lab, is studying the carbon footprint of oil palm plantations that do not entail deforestation: they are looking at plantations set up in grassland plains or in the savanna in Colombia, and at intercropped plantations in Cameroon. These efforts are aimed at minimizing the need to clear natural land for agriculture.