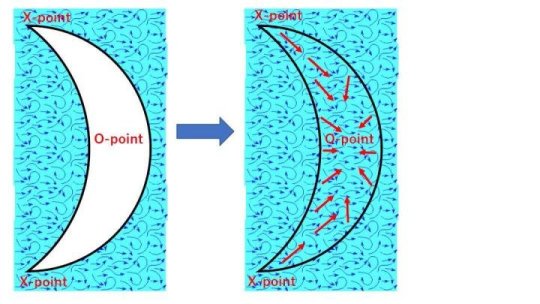 In research to date, numerous turbulences have been observed. It was very difficult to distinguish whether that turbulence occurred at that place or whether it occurred at another place and propagated to that place. That the turbulence generated expands into other regions, that is, the phenomenon called “turbulence propagation” has been predicted theoretically, but has not been observed experimentally.

The research group of Professor Katsumi Ida and Professor Tatsuya Kobayashi of the National Institutes of Natural Sciences (NINS) National Institute for Fusion Science (NIFS) and United States collaborators conducted research on turbulence propagation in the Doublet III-D tokamak of General Atomics, in the United States. By applying “heat pulse modulation method” conceived in the Large Helical Device (LHD) at NIFS to measure turbulence in a special region, the “magnetic island,” where turbulence should not be generated because there is no temperature gradient in the magnetic island. They discovered that the turbulence exists in the magnetic island, and propagates faster toward the center of the magnetic island, which is called the O-point, than the modulated temperature change. Thus “turbulence propagation” was observed for the first time in the world.

This result is valuable because of the experimental demonstration of a new way of thinking regarding the suppression of turbulence using the idea of “propagation of turbulence.” And that an article has been published in the famous academic journal Physical Review Letters is evidence of the high level of world class research.

In the future we will continue to improve high-performance plasma through accumulating further knowledge on the suppression of turbulence.

In order to confine plasma, it is necessary to form a nested magnetic container. The form of the cross section of the container resembles concentric rings, such as tree rings. In this experiment, a small magnetic field from outside was purposely added to the intrinsic magnetic field for making magnetic field configuration with a crescent shape similar to a grain. This structure is called a magnetic island because it resembles an island in the middle of a river. Inside the magnetic island, the plasma has no temperature gradient and turbulence is not predicted to be generated forming a unique region.