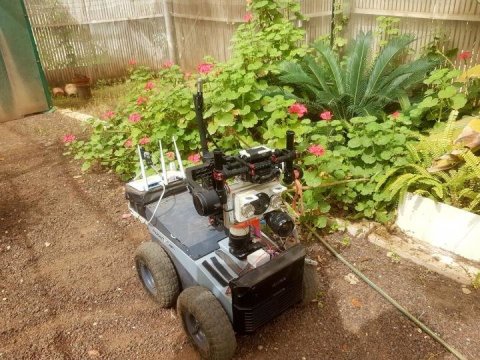 A fully autonomous bat-like terrestrial robot, named Robat, can use echolocation to move through a novel environment while mapping it solely based on sound, according to a study published in PLOS Computational Biology by Itamar Eliakim of Tel Aviv University, and colleagues.

Bats use echolocation to map novel environments while simultaneously navigating through them by emitting sound and extracting information from the echoes reflected from objects in their surroundings. Many theoretical frameworks have been proposed to explain how bats routinely solve one of the most challenging problems in robotics, but few attempts have been made to build an actual robot that mimics their abilities. Unlike most previous efforts to apply sonar in robotics, Eliakim and colleagues developed a robot that uses a biological bat-like approach, emitting sound and analyzing the returning echoes to generate a map of space.

Robat has an ultrasonic speaker that mimics the mouth, producing frequency modulated chirps at a rate typically used by bats, as well as two ultrasonic microphones that mimic ears. It moved autonomously through a novel outdoor environment and mapped it in real time using only sound. Robat delineates the borders of objects it encounters, and classifies them using an artificial neural network, thus creating a rich, accurate map of its environment while avoiding obstacles. For example, when reaching a dead end, the robot used its classification abilities to determine whether it was blocked by a wall or by a plant through which it could pass.

“To our best knowledge, our Robat is the first fully autonomous bat-like biologically plausible robot that moves through a novel environment while mapping it solely based on echo information — delineating the borders of objects and the free paths between them and recognizing their type,” Eliakim said. “We show the great potential of using sound for future robotic applications.”