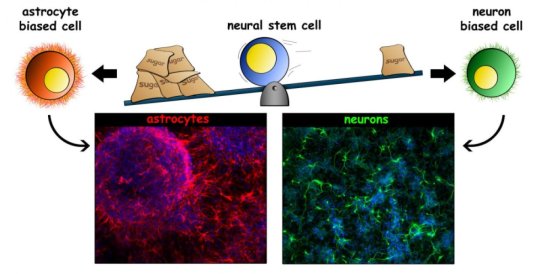 Researchers from the University of California, Irvine have identified intrinsic cell properties that influence the fate of neural stem cells, affecting what type of brain cell they will form: neurons, astrocytes, or oligodendrocytes. This discovery could give scientists a new way to predict or control the fate of stem cells, improving their use in transplantation therapies.

Published today in Stem Cell Reports, the study was led by Lisa A. Flanagan, PhD, an associate professor of neurology at UCI School of Medicine, and revealed that neural stem cells differing in fate potential expressed distinct patterns of sugars on the cell surface. These sugars contribute to neural stem cell membrane electrical properties and ultimately cell fate. “Stem cells hold great promise for treating disease, but it can be difficult to tell what a stem cell will become after it has been transplanted,” said Flanagan. “We can transplant the same number of stem cells in one patient as in another, but the outcomes will be significantly different if the transplanted cells in the first patient become neurons and those in the second patient become astrocytes. With this new discovery, we will be able to predict what a neural stem cell will become and possibly direct cell fate, which will greatly enhance the success of stem cell transplant therapies for a wide variety of diseases.”

In this study, researchers examined several pathways that add sugars to cells and found one that differed between cells that make neurons and those making astrocytes. They stimulated this pathway in neural stem cells, changed cell electrical properties, and caused them to make more astrocytes and fewer neurons, showing that cell surface sugars can control fate. The pathway is active in cells grown for transplants and in cells of the developing brain, so this pathway may also control how neural stem cells form neurons and astrocytes when the brain is being formed during development.

The team is now testing whether modifying this pathway changes how cells behave in transplants or how the developing brain is formed. They are focusing on the machinery inside the cell that adds the sugars in the first place, to see how the process is regulated. They also are finding that particular proteins on the cell surface are changed by this pathway, which will help to uncover how the sugars are telling stem cells which type of cell to form. The long-term goal of these studies is to find ways to improve the effectiveness of stem cell transplants to treat injury and disease.

The work was supported by the National Science Foundation, California Institute for Regenerative Medicine, National Institutes of Health, and National Multiple Sclerosis Society.

bout the UCI School of Medicine

Each year, the UCI School of Medicine educates more than 400 medical students, as well as 200 doctoral and master’s students. More than 600 residents and fellows are trained at UC Irvine Medical Center and affiliated institutions. The UCI School of Medicine offers an MD degree, a dual MD/PhD medical scientist training program, PhDs and master’s degrees in anatomy and neurobiology, biomedical sciences, genetic counseling, epidemiology, environmental health sciences, pathology, pharmacology, physiology and biophysics, and translational sciences. Medical students also may pursue an MD/MBA program, a combined MD/Master’s in Public Health or a dual MD/master’s program called the Program in Medical Education for the Latino Community (PRIME-LC). UCI School of Medicine is accredited by Liaison Committee on Medical Accreditation (LCME), and ranks among the top 50 nationwide for research. For more information, visit: som.uci.edu.

About the University of California, Irvine

Founded in 1965, UCI is the youngest member of the prestigious Association of American Universities. The campus has produced three Nobel laureates and is known for its academic achievement, premier research, innovation and anteater mascot. Led by Chancellor Howard Gillman, UCI has more than 30,000 students and offers 192 degree programs. Located in one of the world’s safest and most economically vibrant communities, UCI is Orange County’s second-largest employer, contributing $5 billion annually to the local economy. For more on UCI, visit http://www.uci.edu.