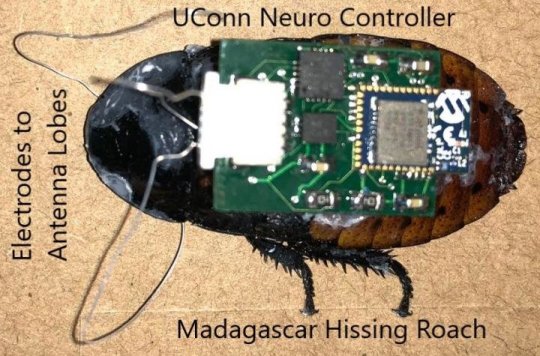 A tiny neuro-controller created by researchers at the University of Connecticut could provide more precise control of futuristic biobots, such as cyborg cockroaches that are already being tested for use in search and rescue missions inside collapsed buildings.

Scientists have spent the better part of the past decade exploring ways to tether live insects to miniaturized computer hardware so they can manipulate an insect’s movement. Such possibilities are of interest to the U.S. Department of Defense, search and rescue teams, and others.

Success has been limited and numerous technological challenges continue to exist. This is mainly due to the tremendous difficulty building robotic systems at such small scale and the challenge interfacing electronic hardware with the insect’s biological nerve tissue to initiate movement.

The neuro-controller micocircuit developed at UConn is part of a tiny electronic ‘backpack’ that can be attached to the insect with its wires connected to the insect’s antennae lobes. By sending slight electrical charges to neural tissue in either the insect’s left or right antenna lobe, operators can trick the insect into thinking it has detected an obstacle, causing it to move in another direction. A charge sent to the right antenna makes a cockroach move left. Likewise, a charge to the left antenna makes it move right.

While similar control systems for insects already exist, what makes UConn’s controller unique is the degree to which operators can stimulate an insect’s antennae lobes using four-channel microcircuitry. The system also provides real-time feedback of the insect’s neural-muscular response to stimuli. That level of detail makes it easier to monitor and control movement, a long sought-after advantage in the micro robotic insect community.

“The use of insects as platforms for small robots has an incredible number of useful applications from search and rescue to national defense,” says Abhishek Dutta, an assistant professor of electrical and computer engineering at UConn, who developed the circuit along with an undergraduate researcher in his lab, Evan Faulkner. “We believe our microcircuit provides a more sophisticated and reliable control system that brings us one step closer to real world implementation of this technology.”

The controller’s value comes in the form of an advanced 9-axis inertial measurement unit inside the UConn device that tracks an insect’s linear and rotational acceleration, identifies its compass heading, and detects the ambient temperature surrounding the creature. The latter feature is important, the scientists say, because tests have shown that ambient temperature can have an impact on how some insect hosts perform.

The information gathered by the microcircuit is transmitted to the operator via a tiny Bluetooth antenna on the device. The signal can be easily detected by an ordinary cellphone. As the insect’s heading, acceleration, and other data comes in, operators can extrapolate the insect’s trajectory, adjust the antennae stimuli accordingly, send the appropriate electrical impulses to the insect remotely, and steer it in a desired direction.

To test the new controller, Dutta, an expert in control system optimization and cyber-physical systems, attached the device to a Madagascar hissing cockroach in his lab. The tests showed the cockroach moving left when its right antenna lobe was stimulated and moving right when the left one received a small electrical charge.

One interesting tidbit the researchers noticed was that the intensity of the roach’s movements left or right in response to artificial stimulation decreased after the initial stimulus. So if the roach made a hard left after the first electronic pulse hit its right antenna lobe, its left turn was less dramatic with each subsequent pulse to that lobe.

Dutta and Faulkner plan to conduct additional research to refine the system.

The research is being presented at the Conference on Cognitive Computational Neuroscience in Philadelphia on Sept. 6, 2018.

Materials provided by University of Connecticut. Original written by Colin Poitras. Note: Content may be edited for style and length.