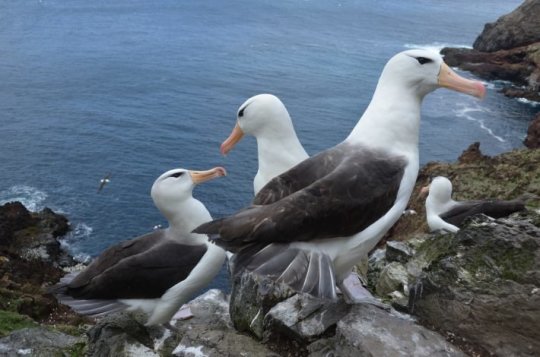 Ecologists from Woods Hole Oceanographic Institution in the US and the French National Center for Scientific Research (CNRS) studied a population of black-browed albatross at Kerguelen Island, part of the French Southern and Antarctic Lands, where 200 breeding pairs have been monitored annually since 1979.

Reaching a wingspan of 2.5 metres, black-browed albatrosses breed on these sub-Antarctic islands during the austral summer, laying a single egg in October that will hatch in December. The chicks fledge in late March at a size similar to that of an adult.

Climate affects this seabird species in complex ways. In this study, the researchers developed a matrix population model that takes account of the combined effects of climate variables and functional traits in order to understand the entire life cycle and how population growth may be affected in light of a changing climate. Functional traits such as body size, timing of breeding, and foraging behaviour all have an impact on demographic traits such as survival and reproduction.

They found that changes in sea surface temperature during late winter cause the biggest variations in the population growth rate, through their impact on juvenile survival during their first year at sea. The effects of climatic conditions on seabirds generally occur indirectly.

She added: “As our oceans are projected to warm, fewer juvenile albatrosses will manage to survive and populations are expected to decline at a faster rate.”

The results suggest that changes in population size and structure are driven by the combined effects of climate over various seasons, multiple functional traits and demographic processes across the full life cycle of black-browed albatross. The study also unravelled the important role of the juvenile phase and wintering season, two understudied parts of the life cycle of this migratory species.

“Albatrosses and other seabirds are long-lived predators that fly very long distances to forage at sea and nest on land. As a key indicator of ecosystem health, studying how seabirds fare in the face of climate change can help us predict the ecological impacts on the entire marine food web,” concluded Dr Christophe Barbraud of CNRS, who co-authored this study.