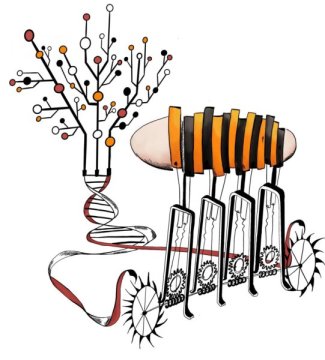 The first moments of life unfold with incredible precision. Now, using mathematical tools and the help of fruit flies, researchers at Princeton have uncovered new findings about the mechanisms behind this precision.

In a new study published in the journal Cell, the team showed that cells determine exactly where they need to be and therefore what body parts they will become by optimizing the use of all information available from the genetic code. This optimization allows each cell to position itself within one cell’s width of where it should be, rather than making errors that later are corrected.

The study also demonstrates that a complex biological system can operate according to a mathematically optimal process. The team was able to predict the placement of cells to within 1 percent of their actual locations along the length of the embryo, showing that biological behaviors can be computed and predicted from theoretical principles.

“The information required to specify precise cell locations — and therefore what body parts they will become — is present and utilized at the earliest stages of development in fruit flies,” said Thomas Gregor, associate professor of physics and the Lewis-Sigler Institute for Integrative Genomics. “This contrasts with the prevailing view that the position of the cells is refined slowly over time.”

“The theoretical idea is very simple, which is that every cell is using all the information that it can squeeze out of the relevant genes,” said William Bialek, the John Archibald Wheeler/Battelle Professor in Physics and the Lewis-Sigler Institute for Integrative Genomics. “Something we’ve known for a while, but never stop being amazed by, is that the whole system is incredibly precise, and this fact is what spurred us to believe that the cells are using all the information that they can.”

Cells take cues from genes, or more specifically, from the protein molecules that those genes produce. But do the cells use all of the information to get everything right the first time? Or is the system messy, with mistakes that are repaired before irreparable harm is done to the embryo?

The question was exactly the type of big-picture problem that the team of biologists and physicists, who have been working together since the early 2000s, likes to tackle.

Thanks to previous work by team member Eric Wieschaus, the Squibb Professor in Molecular Biology and professor of molecular biology and the Lewis-Sigler Institute for Integrative Genomics, scientists know exactly which genes and molecules are involved in creating stripes across the embryo that mark the segments of the fly larva. If anything goes wrong, the stripes form in the wrong places or not at all.

“The experiment defines the first truly quantitative measure of how much information cells have available for crucial developmental decisions and how much of that information they actually use,” said Wieschaus, who is a Howard Hughes Medical Institute investigator and earned the 1995 Nobel Prize in Physiology or Medicine for work on the genetic control of early embryonic development.

“This gives us an amazing tool for understanding how decision-making in biology actually works, one that is useful at levels ranging from the way proteins bind to DNA to how new biological pathways arise and compete during evolution,” he said.

Mariela Petkova, a co-first author on the study, was an undergraduate working in Gregor’s laboratory when she took on the question of how the cells use genetic and molecular information to find their locations and fates.

“We take seriously the idea that in a developing embryo cells need to “know” their position in order to make the correct developmental decisions,” said Petkova, Class of 2012. “One can imagine cells as GPS devices which, instead of satellite signals, collect molecular ones to figure out their locations. We are able to decode how such molecular signals specify positions along the length of the early fly embryo.”

Scientists have long known that the stripes form as a result of a cascade of steps that starts with the fly mother, who tucks into each egg an instruction set built from three different kinds of signaling molecules.

These signaling molecules spread through the embryo’s body, forming concentration gradients that activate four so-called “gap” genes. The expression of these genes produces protein molecules that act on DNA segments known as enhancers to drive “pair-rule” genes to produce the striped pattern.

Petkova made detailed measurements of gap gene expression and the exact amounts of molecules produced in the cells along the long body axis. She started the research as part of her senior thesis and then deferred going to graduate school for a year to continue working on the project. She finished the work while on breaks from her studies at the Harvard University Biophysics Graduate Program.

With these measurements in hand, the theoretical physics part of the team was able to model how the cells use information to find their place in the embryo. The team included co-first author Gašper Tkačik, who earned his Ph.D. in physics at Princeton in 2007 and is now a faculty member at the Institute of Science and Technology Austria.

With that assumption, Tkačik and Bialek used a relatively straightforward mathematical approach to predict where the stripes would form. The team then compared the predictions to the actual measurements of gap molecules and found they had accurately anticipated the locations of the stripes.

The real proof came when Petkova studied the eggs laid by flies which have mutations in the genes coding for the maternal signaling molecules that are at the start of the cascade. The team precisely predicted how various gene mutations altered the stripe pattern — for example by making some of the stripes disappear or form in the wrong place.

“We used genetic manipulations to shuffle the gap gene patterns and ‘trick’ the cells into ‘thinking’ they were somewhere else along the length of the embryo,” Petkova said. “We put these shuffled patterns through our decoder and built decoding maps, which told us where the cells were versus where they thought they were. Using these maps we predicted where the embryos would make stripes. When we looked at these mutant embryos under a microscope we actually found the stripes at the predicted locations! It was very satisfying.”

The study gets at the question of whether it is possible to make robust predictions about biological systems starting from theoretical principles, according to the authors.

“This finding gives us theorists hope that our job in biology will not be forever relegated to fitting models from data, but actually predicting and quantitatively understanding why evolution came up with certain solutions,” Tkačik said. “This gives promise, for at least a few example cases, that there may be a ‘predictive theory for biology’ — an excellent motivation for future work.”

Added Bialek: “A hallmark of modern physics is that general theoretical principles can be connected to an experiment in exquisite quantitative detail,” he said. “It has long been difficult to imagine this sort of theory — experiment interaction in the physics of biological systems — living things seemed too complex, too messy. This work is one of the strongest examples of theory-experiment comparison that I have seen. I had always hoped that we would get to this level, but I didn’t know when it would happen.”

Wieschaus added: “Most scientists tend to think that biological processes are inherently sloppy and that cells achieve precision by multiple corrective steps and complicated interactive networks. Such processes certainly exist. What is amazing to me, however, is how precise and reproducible information can be at a single step in development, and once that information is there, how evolution and natural selection can push the cells to make maximum efficient use of that information.”

The fruit fly (Drosophila melanogaster) is frequently used to learn general principles of biology that may apply to more sophisticated organisms such as humans. Whether organisms other than the fruit fly adhere to this optimal use of information remains to be seen, said Gregor.

“This research gives us a look at how genetic networks encode information, how networks work together, and how they do the computations they can do,” Gregor said. “There are genetic networks that do all sorts of things in biology, so this is certainly a rich area for further exploration.”

This work was supported in part by U.S. National Science Foundation grants PHY-1607612, CCF-0939370 (Center for the Science of Information), and PHY-1734030 (Center for the Physics of Biological Function); by National Institutes of Health grants P50GM071508, R01GM077599 and R01GM097275; by Austrian Science Fund grant FWF P28844; and by a Howard Hughes Medical Institute International Predoctoral Fellowship.