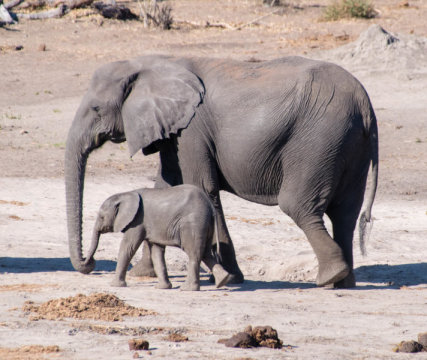 Young female orphan elephants have a tougher social life than non-orphans, a new study suggests, adding to a growing body of evidence of how the impacts of poaching cascade through elephant societies.

The research, part of a wider study by Save The Elephants and Colorado State University into the social impact of adult mortality on orphaned female elephants, shows that orphans receive more aggression from other elephants — whether overt aggression like pushing or more subtle forms like displacements — than non-orphans.

Orphans that leave their families and move into another family unit are likely to receive more aggression than those integrated in their natal groups.

The study, conducted over five years and led by CSU postdoctoral researcher Shifra Goldenberg, analyzes the social interaction patterns of juvenile female elephants in Northern Kenya who have lost their mothers to either poaching or natural mortality. The work shows that orphans are resilient, and rebuild their social lives by strengthening relationships in response to maternal mortality.

“Elephants live in matriarchies that facilitate access to limited resources like food, water, and shade,” said Goldenberg, who is also a researcher with Save The Elephants. “We found that orphaning and natal group dispersal may trigger resource opportunity costs for young females, as they appear to be subordinate to other group members. What this means for their long-term survival and reproduction remains an open question.”

While the research team found that orphans rebuild their social networks, scientists also saw that orphans’ social lives do not return to normal. While they maintain rich and varied relationships with other elephants — relatives and non-relatives — they have markedly less interaction with adult females. This reduces access to favored foods and resources, as well as to the elders, whose experience is critical to the transmission of information between generations in elephant societies.

The latest findings around elephant aggression shed new light on the substantial indirect impact of poaching on orphan survivors, demonstrating that socially disadvantaged elephant orphans have a tougher life than non-orphans.

Between 2009 and 2013, the population of elephants in Samburu and Buffalo Springs National Reserves in Northern Kenya, where the study was conducted, was hit by increased ivory poaching and a severe drought that left many young elephants orphaned, without mothers or grandmothers.

Some orphans chose to remain with what is left of their disrupted groups, others left their natal group to attach to unrelated individuals. Still others became drifters, showing some social preference but not fully committing to any one group.

The researchers found that only orphans from disrupted families tend to disperse into new social groups but that during feeding, these same elephants receive more aggression than orphans in natal groups.

George Wittemyer, study co-author and an associate professor in the Department of Fish, Wildlife, and Conservation Biology at CSU said that the recovery of elephant populations from prolonged ivory poaching will depend largely on the ability of young females to successfully reconstruct their social lives and family groups.

“Deep, life-long bonds are the fundamental component of elephant societies, said Wittemyer, who also serves as chairman of the Scientific Board of Save The Elephants. “Fine resolution studies like these allow us to gauge the response of young females to human driven disruption.”

In the coming years the Samburu orphan study will relate the social costs of being an orphan to fitness as this could be important to the recovery of elephant populations affected by the ivory trade and other forms of disruption.