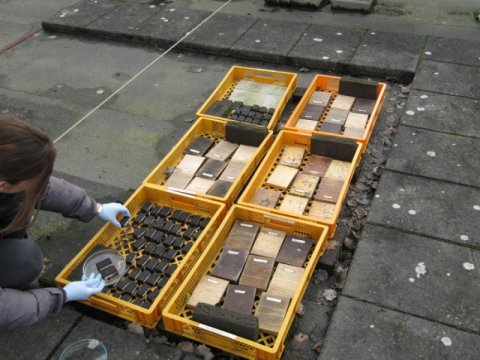 A fungus that does not attack wood, but preserves it. It sounds strange, but it is possible. Elke van Nieuwenhuijzen will be receiving her doctorate next Wednesday 7 November at Eindhoven University of Technology for her study of black fungi on oiled wood that behave like a ‘biofinish’. This layer colors the wood and protects it from wood rot and degradation by sunlight. An additional advantage: the fungus automatically repairs damage in the protective layer.

The discovery had already been made almost 20 years ago, by chance, by researcher Michael Sailer who investigated whether vegetable oil can conserve wood. He discovered that pieces of coniferous wood impregnated with linseed oil and hemp oil turned black after being exposed to wind and weather. But the discolored wood did not become soft, like rotten wood, it remained hard. The wood was possibly protected by the black layer, which the microscope showed to be fungus.

Elke van Nieuwenhuijzen has now thoroughly investigated the natural fungal composition of these layers. She was supervised by, among others, mycologists from the Westerdijk Fungal Biodiversity Institute in Utrecht. Outdoors, she laid planks of three types of wood (spruce, pine, ilomba), impregnated with three types of oil (olive oil, crude linseed oil, stand oil). The fungi then formed automatically and on some planks formed an opaque black layer. She did the same in Norway.

Olive oil worked best in the Netherlands, producing an opaque black protective layer for all three types of wood. Crude linseed oil on pine also worked well. In Norway, the picture was broadly the same, but it took longer for the layer to fully cover the planks. Van Nieuwenhuijzen suspects that this is because of the colder climate.

The effect of the protective layer partly results from the discoloration: the black layer blocks UV light, and thus prevents degradation. Van Nieuwenhuijzen also suspects that the dark pigmeneted fungi, due to their exuberant presence, do not give any chance to wood-destroying fungi. That oil repels water is probably beneficial for thedark pigmented fungi. Water then lies in droplets on the wood, which is where the fungus thrives.

One of the fungi that was always found was of the genus Aureobasidium. Apparently it thrives in all kinds of climatic conditions. How the fungus survives and what it lives from is not yet entirely clear. Elke: ‘It’s an enigmatic fungus. It develops in many different ways. Sometimes it behaves like a yeast, sometimes it forms threads, sometimes it turns black, sometimes it doesn’t, you could say it is a kind of Barbapapa.’

The PhD student does not advise people to treat their outside wood with olive oil themselves. Her research concerned wood impregnated with oil, or permeated. She does expect it to work, however, if the oil is applied with a brush, but it can take months and sometimes even years before the black spots have grown together into a covering layer, especially in sheltered places.