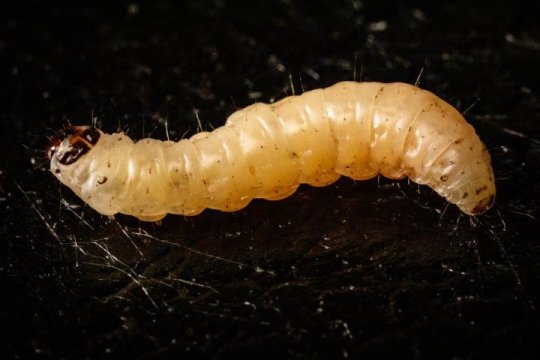 New research reveals that Aspergillus flavus, a fungus that produces carcinogenic aflatoxins that can contaminate seeds and nuts, has a multilegged partner in crime: the navel orangeworm caterpillar, which targets some of the same nut and fruit orchards afflicted by the fungus. Scientists report in the Journal of Chemical Ecology that the two pests work in concert to overcome plant defenses and resist pesticides.

“The fungus is an incredibly opportunistic pathogen. It infects all kind of plants. It also infects animals on occasion, including humans,” Berenbaum said. “And it’s very, very good at breaking down toxins.”

The caterpillar, Amyelois transitella, also is an opportunistic feeder. Unlike most insect larvae, it somehow overcomes the defenses of a variety of host plants, including almonds, pistachios and figs. The caterpillar chews its way in and contaminates the fruits and nuts with its excrement and webbing. It also opens the door to A. flavus infection. Unlike many other insects, the navel orangeworm caterpillar can metabolize aflatoxin, making it immune to this toxic fungal byproduct, Berenbaum said.

Prior to the new study, researchers and growers had observed coinfection with the fungus and the caterpillar, but did not know whether the two simply tolerated one another or worked together in a mutualistic partnership.

To find out, the team ran experiments to see how laboratory-reared navel orangeworm caterpillars responded to specific plant defensive compounds and pesticides in the presence or absence of the fungus. They measured caterpillar mortality and time to pupation in a variety of conditions. The tests included a caterpillar strain that was susceptible to pyrethroid pesticides and another that was resistant.

The tests revealed that the caterpillars developed much more rapidly in the presence of the fungus, regardless of the natural or human-made toxins that were also present. Larvae exposed to the plant defensive compound xanthotoxin developed nearly twice as fast when the fungus was also present. Larvae fed a diet containing xanthotoxin or bergapten — another phytochemical in the same class as xanthotoxin — also lived much longer in the presence of the fungus than when exposed to the chemicals alone.

“It’s very likely that this caterpillar has managed to colonize so many new crops because its partner fungus can break down the chemical defenses of the tree crops that it encounters,” Berenbaum said. “It’s also giving this caterpillar an extra edge because the fungus is breaking down some of the pesticides that growers are using to combat the caterpillar.”

The California Pistachio Research Board and the Almond Board of California funded this research.