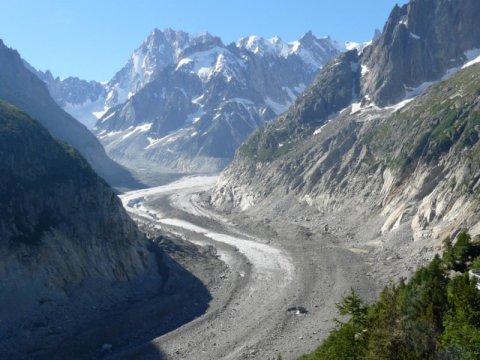 A warming Earth causes the volume of mountain glaciers and their extent to decline globally for decades. At the same time, the cover of many glaciers with debris changes. However, this debris coverage has been rarely recorded so far. A study by the scientist Dirk Scherler of the German Research Centre for Geosciences GFZ and two colleagues from Switzerland — one of them employed by Google — now shows a possibility to detect the extent of debris on mountain glaciers globally and automatically via satellite monitoring.

In their work, the scientists used the cloud computing platform “Google Earth Engine.” This is a web-based development environment and database of satellite imagery from forty years of remote sensing that is freely accessible to researchers. The images for the study in the journal Geophysical Research Letters came from the satellites Landsat-8 and Sentinel-2 and have a spatial resolution of 30 by 30 and 10 by 10 meters respectively per pixel. The scientists compared the images from space with an electronic glacier catalog, the Randolph Glacier Inventory, to determine the debris coverage. For this they have developed an automatic method that makes pixel-by-pixel comparisons across the globe. “Our approach, in principle, allows rapid mapping of changes in debris coverage for any period for which satellite imagery is available,” says Dirk Scherler.

A manual review showed robust results. According to this, 4.4 percent of the glacier surface in mountains is covered with rubble (the Greenland ice sheet and the Antarctic were not included in the study). The distribution is uneven: Towards the poles, the debris coverage decreases as the landscape here is rather flat. In steep mountain regions, such as the Himalayas, there is more debris on the glaciers. Moreover, the study showed that the coverage ratio is higher for smaller glaciers than for larger ones. With global glaciers shrinking, the percentage of debris coverage is expected to increase, making it more important to monitor debris coverage.

Mountain glaciers are of great importance for regions where their meltwater flows: it serves as drinking water, irrigates agricultural areas or drives turbines. According to the authors, the results of the study provide a basis for future modeling of the effects of debris on the ice, from the regional scale to the global scale.