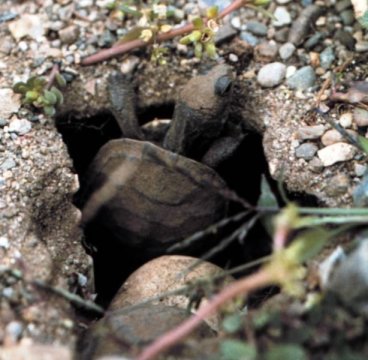 Blanding’s turtle hatchlings need only the sun as their compass to guide them on their way to the nearest wetland — and a place of safety. This is according to John Dean Krenz of Minnesota State University in the US, lead author of a study in Springer’s journal Behavioral Ecology and Sociobiology. The study focused on how this freshwater turtle, native to the US and Canada, is purposefully able to travel in a relatively straight line once it has hatched.

There are many examples of species that are able to navigate long distances, such as migrating birds, or dispersing salamanders. Some animals that move over long distances have a geomagnetic sense that guides them, while others orient themselves according to the sun’s position.

Previous research has shown that young Blanding’s turtle hatchlings (Emydoidea blandingii) initially use visual clues such as dark horizons (which could indicate a water source) when they begin dispersal after emerging from a nest. Once embarking towards a visual target, within a short time they begin to switch their guidance system from visual cues to solar cues to keep them moving in a straight line. This ability to orient themselves becomes fully developed within a day, and is maintained even if they can no longer see their target. Navigating in this way allows the turtles to stay safely on course, and to take the shortest, most direct route even if they have no visual clues to follow.

To find out more about the turtles’ sense of direction, Krenz and his colleagues caught hatchlings of about a day old. These were on their way westwards towards a large wetland adjacent to a forested area. During a two-phase experiment, the turtles were released at the center of a circular field arena where corn stood so tall that they could no longer see their target but could still see the sky. The turtles were re-captured at the arena fence to register their direction of travel. In the first phase, half of the animals were attached with magnets strong enough to disrupt their geomagnetic sense and half were attached with non-magnet controls.

In the second phase, half the animals were kept in a laboratory for 5 to 11 days under lighting conditions simulating normal day and night hours and the other half was manipulated by switching on lighting to simulate daylight six hours earlier than usual. These turtles therefore experienced a clock shift of six hours.

Once released in the corn field, the hatchlings with and without magnets managed to maintain their westward trek to the wetland they were heading towards before their capture and relocation. This was also the case for the turtles that were not subjected to a clock shift. In fact, even after an 11-day holding period, these turtles still had a long-lasting sense of direction. However, those that did experience a clock shift set off in a direction that was about 90 degrees different to the way they were originally going. This makes sense because 6 hours is a quarter of a 24-hour day.

“These results show that the sun compass is necessary and sufficient to help Blanding’s turtles orientate after they have hatched, even if natural environmental cues are not visible,” explains Krenz.

The researchers think that magnetoreception and a magnetic reference may help to develop the turtles’ initial sense of direction during the first hours after they have emerged from their underground nests.