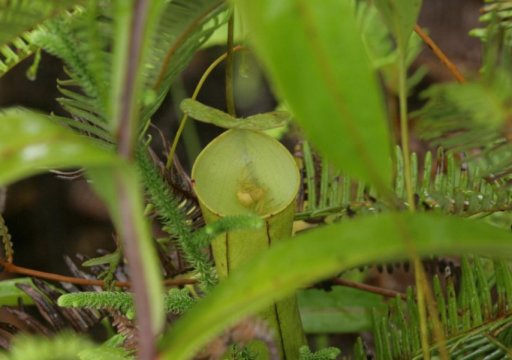 Two recent studies by ecologists from the National University of Singapore (NUS) have shed light on the relationship between the slender pitcher plant and its ‘tenant’, the crab spider Thomisus nepenthiphilus, providing insights to the little known foraging behaviours of the spider.

Thomisus nepenthiphilus is found only in the slender pitcher plant Nepenthes gracilis, which is native to Singapore and can also be found in Indonesia, Borneo, and Malaysia. Although the pitcher plant is a carnivore that traps and devours insects to supplement its nutrient requirements, the crab spider Thomisus nepenthiphilus is able to exploit the pitcher plant’s sweet-smelling nectar to catch its prey while at the same time, provide supplementary nutrients for its host.

“Our two studies provide important insights into the circumstances that favour cooperation over parasitism, and the results are pivotal in attaining a better understanding of these interactions,” said research supervisor Associate Professor Hugh Tan, who is from the Department of Biological Sciences at the NUS Faculty of Science.

The benefit of being ‘robbed’

In the first study, Assoc Prof Tan, together with doctoral student Mr Lam Weng Ngai and former undergraduate student Miss Robyn Lim, found that pitchers that are without any crab spider get more nutrients out of each prey, while those inhabited by ‘tenants’ trap more prey but get less nutrients from each prey.

“A trend that has been observed in recent mutualism research is that under more stressful conditions, the frequency and intensity of mutualism between the different organisms increases. Our findings support this observation. In other words, the age-old adage ‘a friend in need is a friend indeed’ is true not just for humans, but also for plants and animals,” said Assoc Prof Tan.

Assoc Prof Tan and Mr Lam also conducted additional experiments in the natural habitat of the plants. Through field surveys, the researchers identified the species of prey that were found to be in greater numbers in pitchers that were inhabited by spiders, and those that were not.

Laboratory experiments were conducted to measure the nutrient contents of these prey species to estimate how much nutrients the pitchers would obtain if the prey had been trapped with, and without, the help of the crab spiders.

The results of this study were published in the Journal of Animal Ecology on 10 October 2018.

Theoretical model to be constructed

Based on the insights gained from these two studies, the research team is now constructing a theoretical model on mutualisms that involve the provision of nutrients by one species to another. Such a model will allow scientists to examine the factors that make mutualisms stable, and monitor how changes in the environment, such as global warming or habitat modification, will alter the ecological outcomes.