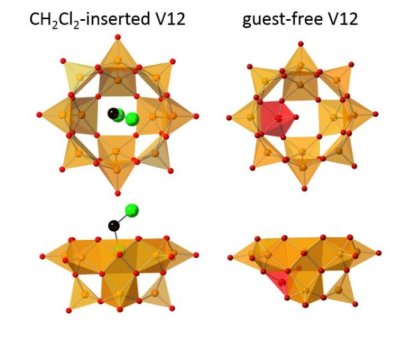 How do you separate carbon dioxide from carbon monoxide? One way, showcased by a new study from Kanazawa University, is to use a bowl of vanadium. More precisely, a hollow, spherical cluster of vanadate molecules can discriminate between CO and CO2, allowing potential uses in CO2 storage and capture.

At the molecular scale, small objects can fit inside larger ones, just like in the everyday world. The resulting arrangements, known as host-guest interactions, are stabilized by non-covalent forces like electrostatics and hydrogen bonds. Each host will happily take in certain molecules, while shutting out others, depending on the size of its entrance and how much interior space it can offer the guest.

One such host is V12 — a rough sphere made from 12 atoms of the transition metal vanadium, connected through 32 oxygen atoms. The bowl-like structure has an opening at one end, with a width of 0.44 nanometers, perfect for letting in the right molecule to nestle inside the cavity.

“V12 accepts a range of guests on the scale of small organic compounds,” says Yuji Kikukawa, co-corresponding author of the Kanazawa study in Angewandte Chemie. “In fact, it’s rather hard to isolate an empty V12 by itself. While the host stabilizes its guest, so the guest returns the favor — if we remove the guest, the host quickly replaces it with another molecule.”

Each vanadium atom in V12 forms a square-pyramid with five oxygens. The oxygens of each VO5 point outwards, while the positive charge from vanadium fills the inner cavity, helping to stabilize electron-rich (or anionic) guests. However, the Kanazawa team created a guest-free V12 for the first time, by using a solvent — acetone — whose molecules are too bulky to fit through the entrance.

To make up for the missing guest, the empty V12 bowl did something unexpected. The VO5 unit at the bottom flipped inwards, like an umbrella inverting in heavy wind. Now, the host cavity was filled by the negative terminal oxygen of the single “upside-down” VO5. This atomic shifting to accommodate a new structure, termed a polytopal rearrangement, had never been seen in metal oxide clusters. The structure transformation could be monitored by infrared spectroscopy.

“We then took the empty V12 and explored which guests we could insert back into the bowl,” says the authors. “Nitrogen, methane and carbon monoxide were all rejected, but carbon dioxide was readily taken up. This immediately suggests a way to separate CO2 from other gases.”

In fact, V12 and CO2 proved such a perfect fit that CO2 could be inserted even at low atmospheric pressure. V12 might therefore be an ideal solution in CO2 capture to combat climate change, and even in CO2 storage for the emerging technology of artificial photosynthesis.