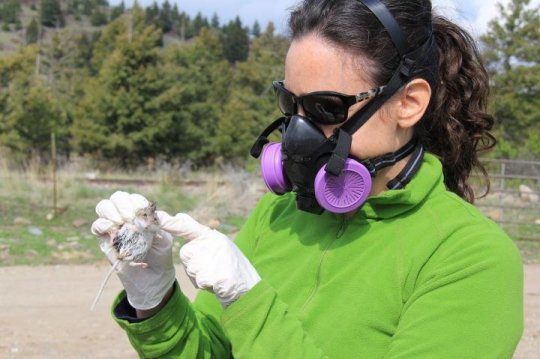 Biodiversity is disappearing at an alarming rate as infectious diseases increasingly spill over from wildlife to humans. Disease ecologists fervently debate whether biodiversity loss leads to an increased disease risk. Now, a University of Montana researcher has published a new study with some answers.

UM Assistant Professor Angela Luis shows for the first time that species diversity can have both positive and negative influences on disease transmission in the same host-pathogen system at the same time in her article published in the Proceedings of the National Academy of Sciences.

For a number of species, a more diverse community decreases infection risk, termed “the dilution effect,” because biodiversity dilutes infection. If this is a widespread phenomenon, then preserving biodiversity is a win-win for both animal conservation and human health.

However, a debate rages about how general this phenomenon is since, for some systems, a more diverse community increases disease risk, termed the “amplification” effect. For other systems, biodiversity has no consistent effect, leaving its relationship to disease unidentified.

In the latest issue of PNAS, Luis, a disease ecologist, shows that the Sin Nombre hantavirus among rodents displays a significant dilution effect. Areas with a more diverse rodent community have lower hantavirus prevalence among deer mice, which are the main reservoir for the disease. When the virus spills over into humans, it causes hantavirus pulmonary syndrome, which has infected more than 700 people and killed about 1 in 3 since its discovery in 1993.

Luis’ study shows deer mouse density causes the dilution effect. In more diverse communities — with more rodent species present in the same area — there tend to be fewer mice due to competition, and disease spread slows down.

However, for a given mouse density, as rodent species diversity increases, infection spreads faster in a “component amplification effect” as mice become stressed and their immunity decreases. Therefore both dilution and amplification occur in the same system at the same time.

It’s not as simple as more biodiversity means less disease.

“It’s been wild to see the debate among disease ecologists in the literature and at conferences. It has been heated at times,” Luis said. “Although this study doesn’t resolve the debate, it provides an interesting perspective — the inconsistent findings of whether diversity increases or decreases disease risk may be resolved by delving into the different mechanisms determining disease transmission.”