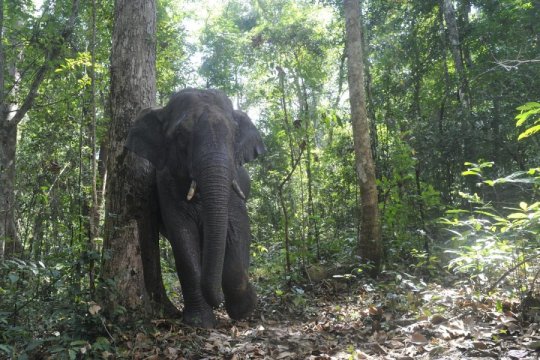 Deer, bears, gibbons, but especially elephants, play an important role in seed dispersal for a large-fruited tree in the forests of Thailand, according to a new study publishing July 18 in the open-access journal PLOS ONE by Kim McConkey of the National Institute of Advanced Studies in Bangalore and colleagues from BIOTEC, Thailand. The data illustrate the complexity of forest ecology and hint that, at least for this one species, changes have occurred that have diminished its overall reproductive success.

Known collectively as megafauna, large animals, and particularly herbivores, ARE critical for dispersal of seeds of many terrestrial plants, especially those bearing large fruits (“megafaunal fruits”), which depend on megafauna for spreading their seeds. But as a group, megafauna encompass a diverse range of body sizes and physiology, and the relative contribution of each to seed dispersal for most megafaunal plant species is poorly characterized.

To address this question, the authors tracked fruit consumption, seed dispersal, and seed viability for the forest tree Platymitra macrocarpa, a member of the Annonaceae (custard apple) family, which bears 3″-5″ long fruits that are eaten by elephants, sambar deer, bears, and gibbons, among other forest animals. By observing fruiting trees over the fruiting period, sampling dung piles and other sites of deposited seeds, and measuring the rate of germination and growth of deposited seeds, the authors calculated the seed dispersal effectiveness for each megafauna species feeding on the tree’s fruit. While elephants consumed only 3% of the available fruit, they were responsible for 37% of the seeds that produced viable seedlings. In contrast, sambar deer consumed 23% of fruit, but accounted for only 17% of seedlings, due in part to much heavier beetle damage done to the seeds they excreted. A generally low level of new seedlings in the study area suggested a relatively recent decline in one or more seed dispersers.

While smaller members of the forest megafauna such as deer and bear played important roles in dispersing seeds from this tree species, McConkey said, their effectiveness is lower, and thus they require more fruit to achieve the same level of reproduction. “If less vulnerable large herbivores such as deer are unable to replicate the seed dispersal role of threatened mega-herbivores such as elephants, megafaunal fruit could suffer range contractions, affecting forest community composition and potentially forest carbon stocks.”