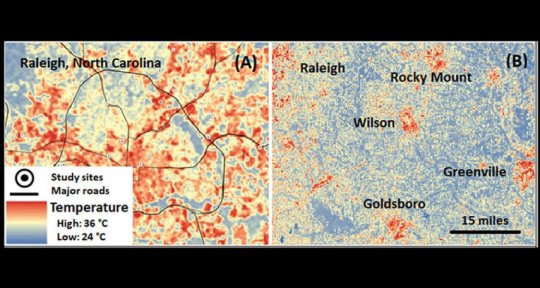 Cities can serve as useful proxies to study and predict the effects of climate change, according to a North Carolina State University research review that tracks urbanization’s effects on plant and insect species.

Cities often display many of the predicted effects of climate change, including higher temperatures, higher carbon dioxide concentration and higher drought rates. Some of those effects are due to impermeable building materials like concrete and glass, which help create “urban heat islands” and prevent water from soaking into soil.

Experiments in cities also have advantages over experiments performed in labs or in specially designed “growth chambers” that attempt to mimic higher temperature or drier soil conditions. Cities are larger than experimental chambers and organisms like trees have lived at higher temperatures their entire lives in cities, whereas other experimental methods can only increase temperature for short periods. Thus, urban areas can show how plants and animals respond to changes in climate over long stretches of time, which lab and growth chamber studies can’t quite match.

“Our review synthesized existing studies that used cities as proxies for climate change, particularly higher temperatures,” said Steve Frank, a professor in the Department of Entomology and Plant Pathology at NC State and a co-author of a paper describing the research.

In cities like Raleigh, N.C., Frank says the effects of urban heat islands on trees and bees are clear and in some cases match effects of climate warming in natural areas. Higher temperatures mean that trees are more susceptible to pests; Frank’s work with insects on red maple trees highlights these results. City bees unaccustomed to high temperatures may leave heat islands to live in cooler city zones or in rural areas. That means some city plants may not be pollinated efficiently.

“However, we still need to figure out in which instances cities are good proxies for climate change and in which instances they are not,” Frank said. “Cities have unique features like buildings and cars that could be confounding variables and need to be accounted for. Likewise, effects on small or immobile organisms like insects and plants may be different from effects on birds, for instance, that could leave a city if it gets too hot.”

Most of the reviewed research took place in North America and Europe. Frank said that more research is needed in African and Asian cities, where biodiversity hotspots may see large climate effects.

“Cities could provide a fruitful avenue for climate studies and help predict which species may expand their range or become pests as the climate warms, and which species may be in trouble,” Frank said. “This information will help people involved in conservation and land management plan for the future.”

The research appears in Proceedings of the Royal Society B. Eleanor C. Lahr, a former NC State post-doctoral researcher, is the paper’s first author. Rob Dunn, a professor of applied ecology, co-authored the paper.

The research was supported by Cooperative Agreement nos. G11AC20471, G13AC00405 and G15AP00153 from the United States Geological Survey; by an Agriculture and Food Research Initiative Competitive grant no. 2013-02476 and an ARPD grant no. 2016-70006-25827 from the USDA National Institute of Food and Agriculture; and by NC State’s Department of Entomology and Plant Pathology.