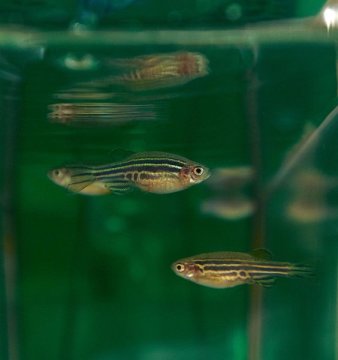 Scientists at the MDI Biological Laboratory and the University of Maine have discovered that genetic material in the cell that was previously thought to be “junk” because of its apparent lack of function likely plays a part in regulating genetic circuits responsible for regeneration in highly regenerative animals.

The discovery of these novel long noncoding RNAs and their role in regulating regeneration may lead to an answer to the paramount question that is being examined by scientists at the MDI Biological Laboratory: If highly regenerative animals such as zebrafish and salamanders can regenerate tissues and organs, why we can’t we?

The answer could one day lead to the development of drugs to trigger humans’ dormant pathways for regeneration. Like most other mammals, the capacity for regeneration in adult humans is limited.

The paper describing the scientists’ findings was published in a recent issue of npj Regenerative Medicine.

“Many chronic and degenerative diseases are characterized by a limited capacity to repair and regenerate damaged tissues,” said Yin. “By advancing our understanding of the genetic regulation of regeneration in highly regenerative animals, we may one day be able to trigger regeneration in humans with drugs that manipulate these pathways.”

The role of noncoding RNAs

In particular, the scientists looked at the role of noncoding RNAs, or RNAs that were formerly considered “junk” because they do not make proteins, in the early stages of heart regeneration in the zebrafish, a common aquarium fish that is one of nature’s champions of regeneration.

RNA, or ribonucleic acid, typically acts as a messenger that transports instructions from the DNA, the carrier of genetic information, to the machinery in the cell that manufactures proteins involved in biological functions.

“One of the secrets to decoding why zebrafish can regenerate their hearts while adult humans cannot may lie with these noncoding RNAs,” said King, the paper’s lead author. “The protein-coding genes in zebrafish and humans are more or less the same — what’s different is how they are regulated during regeneration by noncoding RNAs.”

The discoveries of Yin and King — as well as other recent advances in the field of regenerative biology — have been enabled by the introduction of sophisticated genomic tools that scientists can use to identify the networks of genes responsible for orchestrating the complex process of regeneration in highly regenerative animals.

Applying these tools, the authors defined a comprehensive regeneration gene expression atlas for zebrafish heart regeneration and anchored the data as a point of reference for comparison with other models. Using computational analysis, they identified shared and unique patterns of gene expression in genomic data from various species.

“The biological role of more than 90 percent of the genetic material in the cell is unknown, which raises the question: Why is it there?” said Hermann Haller, M.D., president of the MDI Biological Laboratory. “This extraordinary discovery demonstrates the power of computational biology to map this uncharted genetic landscape.”

In addition to further elucidating the role of microRNAs, which are known to play a regulatory role in heart regeneration, the scientists also characterized the role of known and previously unknown long noncoding RNAs and the genes they potentially regulate through genetic proximity searches that King called “guilt by association.”

The next step is to conduct studies of a select group of long noncoding RNAs in vertebrates with varying capacities for regeneration to validate the functions of the target gene networks that the scientists have identified and to test the extent to which these long noncoding RNAs are responsible for regulating these networks.

The RegenDbase: a ‘Rosetta Stone’ for regeneration

The paper also introduced the RegenDbase, a new database that allows scientists to compare and contrast gene regulatory pathways within and across tissues and research models, with a focus on noncoding RNAs.

The database was created using a new dataset for heart regeneration in zebrafish created at the MDI Biological Laboratory, as well as existing data on multiple types of injured tissues from various species. The utility of the database, which is available to the public, is expected to grow as more data is added, including from human tissues.

Yin compares the database to the Rosetta Stone, which in 1799 allowed linguists to decipher Egyptian hieroglyphs because the information inscribed on it was also presented in ancient Greek, a known language. Similarly, the new database is helping scientists translate the genetic code for regeneration from one species to another.

“Everything in biology comes with an instruction manual,” said Yin, explaining the analogy. “If the manual for regeneration is in ancient Egyptian for zebrafish and in Greek for mammals, we can use the database to translate the codes into the same language so we can identify the components that are lacking in mammals.”

The RegenDbase was created by the MDI Biological Laboratory under its Center of Biomedical Research Excellence (COBRE) program grant award. The institution was designated as a center of excellence in research on the comparative biology of tissue repair, regeneration and aging in 2013, a designation that was recently renewed.