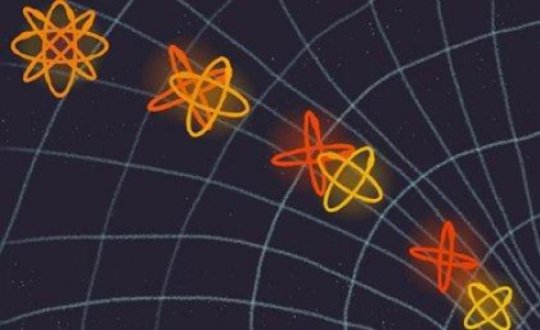 How Einstein’s equivalence principle extends to the quantum world has been puzzling physicists for decades, but a team including a University of Queensland researcher has found the key to this question.

UQ physicist, Dr Magdalena Zych from the ARC Centre of Excellence for Engineered Quantum Systems, and the University of Vienna’s Professor Caslav Brukner have been working to discover if quantum objects interact with gravity only through curved space-time.

“Einstein’s equivalence principle contends that the total inertial and gravitational mass of any objects are equivalent, meaning all bodies fall in the same way when subject to gravity,” Dr Zych said.

“Physicists have been debating whether the principle applies to quantum particles, so to translate it to the quantum world we needed to find out how quantum particles interact with gravity.

“We realised that to do this we had to look at the mass.”

According to the famous equation E=MC2, the mass of any object is held together by energy.

In a state unique to quantum physics, energy and mass can exist in a ‘quantum superposition’ — as if they consisted of two different values ‘at the same time’.

“We realised that we had to look how particles in such quantum states of the mass behave in order to understand how a quantum particle sees gravity in general,” she said.

“Our research found that for quantum particles in quantum superpositions of different masses, the principle implies additional restrictions that are not present for classical particles — this hadn’t been discovered before.”

“It means that previous studies that attempted to translate the principle to quantum physics were incomplete because they focused on trajectories of the particles but neglected the mass.”

The study opens a door for new experiments that are necessary to test if quantum particles obey the additional restrictions that have been found.