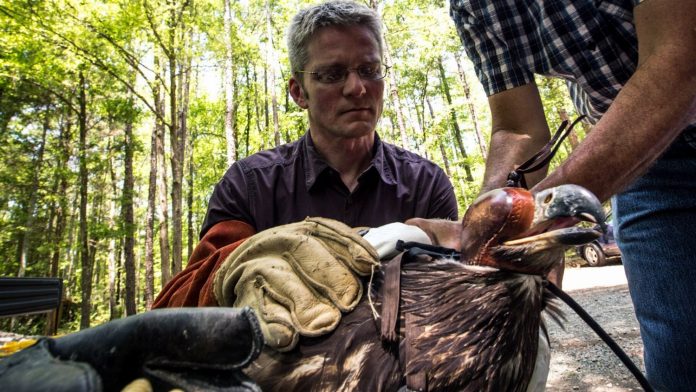 Stories have popped up on social media about unusual wildlife encounters during lockdowns imposed in response to the COVID-19 pandemic. There have been tales of dolphins playing in a port in Italy and jackals roaming in daylight in Israel.

The truth of some of those posts has been challenged or debunked, and now scientists who study wildlife want to know the full, true story of how the “anthropause” – the reduction in human activity to limit the pandemic’s spread – has affected wildlife.

Roland Kays, a zoologist and research professor at NC State and North Carolina Museum of Natural Sciences, joined a call by wildlife scientists from around the globe to share scientific data on animal behavior.

Their goal is to understand how human activity impacted wildlife before, during and after global shutdowns due to the pandemic.

Led by a researcher at the International BioLogging Society, Kays and the other scientists published a call to action for scientists who track animal behavior in a comment in the journal Ecology and Evolution.

The authors emphasized that society’s priority must be to tackle the immense human tragedy and hardship caused by COVID-19, but argue that they should study, for the first time on a truly global scale, the extent to which modern human mobility affects wildlife.

We spoke to Kays about the effort:

The Abstract: What is the “anthropause,” and how does it relate to wildlife?

Roland Kays: The anthropause is this period in the last couple of months where humans have suddenly changed the way they’re moving around the planet. We call it a “pause” because it’s a decrease in mobility to try to reduce the spread of COVID-19. It’s more than a pause; it’s also a change. We see people moving a lot less in some places, but they’re also moving a lot more in other places. Use of residential areas is way up because people aren’t downtown at work all the time. In some places certain uses of parks are up, but in other places they aren’t.

We don’t know how that relates to wildlife. The press has been all over a variety of stories about how animals are responding to this change in human movement, but they’re pretty much based on anecdotal information. There are no good data on it yet.

Some of it might be just that people are home, hanging out in their backyards more and seeing animals more. Animals were there all the time; they just didn’t notice them. It’s interesting there has been a lot of media coverage of it, but we don’t know what the truth is. That’s really the goal of our project.

TA: So some of this animal activity might have been happening before?

Kays: Our recent work has shown that suburban areas have a ton of wildlife, and I think a lot of these observations are people noticing what’s always been there. But certainly there’s a lot of potential for this change in movement to also affect animals. I’m really interested to see what we find when we actually do some proper data analysis.

TA: So how are you proposing to study the impact of the “anthropause” on wildlife?

Kays: The question is quite simple, really. We want to compare what animals were doing before the shutdown with what they were doing during the shutdown, and look for differences.

The trick is no one knew this was coming; no one was planning ahead for this, so we are looking for scientists who were already doing studies of animals, and already had data coming in, and use these data to ask this question.

TA: So have you already started this project?

Kays: The lead author on this paper is the head of an organization called the International BioLogging Society, which is a society of people who track animals. BioLogging is like putting a device on animals and seeing where they go and what they do.

We have put out a global call to anybody already tracking animals to say: “Let’s put all of our data together and do a big global analysis.” We had over 200 people respond.

Our effort is one of many that should happen. There are lots of different ways to do this. We’re focusing on the animal tracking question. You could to the same thing with camera trapping; there are lots of ways you could ask this question. It’s a call for this kind of work in general.

TA: How will you be involved in this effort?

Kays: I study animal movement; I do a lot of animal tracking myself. I have a bald eagle we’ve been tracking right now who will be part of this.

I’m also co-principal investigator on the Movebank database, an online tool that lots of researchers use to manage their tracking data. What we really want people to do is share the data with each other. The data on Movebank is still owned by the data owner, not by us – it’s controlled by the scientist, but we give them the tools so they can share it in a safe and controlled way.

TA: So an eagle you’re still studying will be involved?

Roland Kays: The bald eagle is named Freedom. He was released from the Carolina Raptor Center several years ago outside of Charlotte. We put a GPS tracker on him, and we’ve been following him as he migrates up and down the East Coast: up as far as Montreal, down into South Carolina and a lot of time in Virginia and North Carolina.

You can follow him live on the Animal Tracker App – an app for looking at live animal tracking data – along with a lot of other animals from Movebank. We have his record of what he was doing since 2016 at this time of year. Now we can compare what he does this year with the pandemic. So far, his behavior has been pretty similar, but he might be very affected. Some animals are, and some animals aren’t. Both of those are going to be tested.

READ  Science: How can quantum information be transferred from one atom to another? -- (research)

TA: How are you tracking the animals?

Kays: Most of them are tracked using GPS tags. Depending on the animal, the tracking device might be a backpack, or it might be a collar. It might have a solar panel on it if they’re out during the day. They’re recording a GPS point every so often, storing it on board or sending it back through a satellite or a cell network.

TA: What’s the importance of tracking wildlife and how humans impact them?

Kays: Animal tracking lets you know where the animals are going; if they’re surviving or if they’re dying. That’s some of the most basic information we want to gather: Is my animal alive, where is it and how far is it moving? And those are useful for all sorts of questions.

Humans are taking up more and more of the planet and having a lot of negative effects on animals, and sometimes some positive effects. Sometimes animals adapt to humans. Some animals are completely freaked out by humans, and others habituate and become used to them.

The paper, “COVID-19 lockdown allows researchers to quantify the effects of human activity on wildlife,” was published in the journal Ecology and Evolution. Kays was a co-author. Christian Rutz, a biologist at the University of St Andrews, UK, and president of the International Bio-Logging Society, was lead author. See a full list of authors by clicking here. The manuscript preparation was supported through a Radcliffe Fellowship at the Radcliffe Institute for Advanced Study, Harvard University, the European Union’s Horizon 2020 research and innovation program under the Marie Skłodowska -Curie grant agreement, and Autonomous Province of Trento ordinary funds to Fondazione Ednumd Mach.