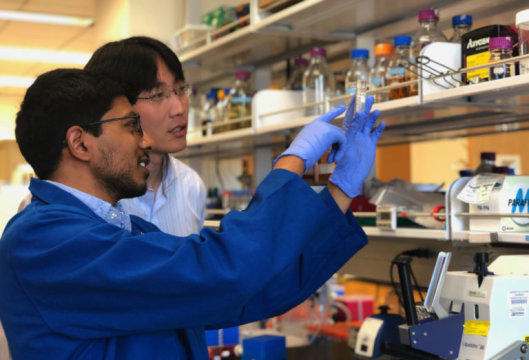 In a process known as directed evolution, scientists reengineer biomolecules to find ones that perform beneficial new functions. The field is revolutionizing drug development, chemical engineering and other applications, but to realize its promise involves painstaking and time-consuming laboratory work.

In a study published today in the journal Cell, University of California, Irvine researchers reported that they have accelerated and simplified directed evolution by having live cells do most of the heavy lifting. By inserting a specially engineered DNA replication system into yeast, the scientists were able to coax selected genes to rapidly and stably mutate and evolve as the host yeast cells reproduced.

“By moving high rates of diversification into cells in a targeted manner, we can grow and pressure those cells to evolve into something new from any genes of our choosing,” said first author Arjun Ravikumar, who earned his Ph.D. in biomedical engineering at UCI earlier this month. “Our work has reduced evolution to be an extremely rapid, straightforward and scalable process.”

Previously, for scientists to screen biomolecules to see if a desired function has been achieved, they needed to build a DNA library in a test tube and insert that DNA into the cells, a laborious and difficult process. The UCI team has eliminated this step entirely in their new approach, letting the cell’s internal machinery do all of the work.

According to senior author Chang Liu, UCI assistant professor of biomedical engineering, when using directed evolution to create a better enzyme or protein — the work that won the Nobel Prize in Chemistry this year — the number of evolutionary cycles becomes very important, because each one can be seen as a step toward a new or improved function. “But if each cycle requires repetitious test-tube DNA molecular biology processing, you can only reasonably go through a few iterations,” he said.

“In contrast, natural evolution runs cycles continuously, essentially by culturing cells over time in an environment that pressures them to develop some new function; the problem from a biomolecular engineering standpoint is that the process is very slow,” Liu added. “We have figured out a genetic architecture that allows biomolecular evolution to be very fast.”

In addition to speeding and simplifying directed evolution, Liu said this new technique can allow scientists to perform additional types of experiments that they had difficulty doing in the past. For example, in their study, the UCI researchers described how they evolved an enzyme in 90 replicate experiments in order to figure out all the ways it could adapt to a certain condition — in this case how a malarial target could develop resistance to a certain drug.

“There are many ways of solving a particular evolutionary challenge such as drug resistance, so the ability to run evolution experiments at the scale that we have allows us to capture and understand more of those possibilities, giving us therapeutically relevant insights into how resistance arises,” Liu said.

Future work will focus on getting the new platform to continuously evolve disease-fighting antibodies and valuable enzymes for drug synthesis, he added.

“Instead of having to inject an antigen into an animal in order to isolate an antibody, imagine just putting it into a culture of yeast cells and having it come out as a specific antibody,” he said. “That could revolutionize how these and other protein drugs are discovered and developed.”

Frances Arnold — the Linus Pauling Professor of Chemical Engineering, Bioengineering & Biochemistry at the California Institute of Technology, who won the 2018 Nobel Prize in Chemistry for her pioneering contributions in the field — said, “Directed evolution is a powerful way to build new proteins, but it can certainly benefit from technological innovations. The technique that Professor Liu and Dr. Ravikumar have developed will stimulate new applications and new avenues of investigation which will continue to expand our ability to compose new DNA.”